Hola! It’s that time of the year where I will say what have been my ten favourite shows of the year and note that there may be SPOILERS ahead from here on out as we continue down the list so..you’ve been warned!

There is a load of new TV shows I didn’t catch this year (House of Cards, Orange Is The New Black, The Americans etc) so if a certain TV show isn’t on the list, it’s because I haven’t watched it. Sorry.

At number 10 is Cinemax’s Banshee. Banshee is a new show that came out earlier in the year where we follow an ex-con man who has been released from prison, flees from New York to Banshee and then takes up the identity of the town’s sheriff as he is murdered on route (You won’t look at a bottle of ketchup the same way again either). Well with this premise and coming from True Blood showrunner Alan Ball, to become the executive producer on Banshee, you would be expecting the same style of sex and action. Then crank it up to eleven as you get some ridiculously brilliant over the top fight sequences (Including three standouts, two involving the main character going head to head against an MMA fight and another against a albino monster of a man in prison and then the one woman on man fight which lasts pretty much the entire episode) but you also get some really good layered characters. The main standout for me is Ivana Milicevic’s character Carrie/Anatasia battling with her old past coming back to haunt her, in this cause Hood and trying to keep her family safe as things start to take a turn.  With Season 2 on the way early in January next year, it’ll be interesting to see where it goes next.

At number 9 is FX (Well now FXX) comedy series It’s Always Sunny In Philadelphia. The show’s been on quite a long run, so long that in Season 9 it’s now only getting to air it’s 100th episode in the middle of the season. But in this season there was some more gems from the gang such as’The Gang Tries Desperately To Win An Award’ which is probably the most meta episode you’ll see all year and some more in ‘Mac Day’ (with special guest Sean William Scott), ‘Flowers For Charlie’ and ‘The Gang Make Lethal Weapon 6’. It’s a tried, tested and proven correct formula which has seen It’s Always Sunny through 9 seasons since 2005 and still proves to be one of the most consistent comedy shows going, in my opinion.

At number 8 is Starz final season of Spartacus. Most shows come with a restricted guideline….but Spartacus is unlike most shows and it certainly ain’t your old man’s Spartacus! I am struggling to think of another show with more sex, blood and limbs flying around than Spartacus but the truth is, Spartacus is like no other and one we won’t see again for a while.

War of the Damned brought us the conclusion to the Spartacus story in early 2013 with Liam McIntyre as solid as always in the lead role and this time we have Marcus Crassus and Julius Caesar added into the already massive list of names going in. Be prepared to see your favourites fall but the spectacle alone of the journey is worth the ride. Also be prepared to feel your heart sink a little with everyone in the end credits and the image of Andy Whitfield (Original Spartacus on the show who tragically passed away in 2011)  comes into play.

At number 7 is Kurt Sutter’s Sons of Anarchy. Entering it’s penultimate season there was instant controversy with the show going with a school shooting angle in the opening episode of the season (personally I figured the school shooting scene in American Horror Story in its first season was more controversial and don’t remember hearing any uproar about that, but that’s just me). From this event it sets a catalyst for Jax to get the club out of the gun business…but at what cost?

Everyone is in solid form as always and nice to see Walton Goggins make a reappearance as Venus Van Damn (in an interesting turn) and from Ron Perlman as the remorseful Clay. with the shocking events of the season finale, it’ll be interesting to see where the final season goes and who will be left standing.

At number 6 it is Kenny Fucking Powers in Eastbound & Down. It came as a surprise when word came out that Eastbound & Down was returning at all this year as Season 3 was stated as being the last…and I’m glad it wasn’t as season 4, the final (really?) season is arguably the best one. Kenny has risen from the ashes like a phoenix once more to climb back into the fame game, this time aiming to be on TV and you just know from previous seasons that there’s going to be a downfall somewhere.

Kenny Powers is one of the best TV figures in the last decade, not just in the comedy spectrum but overall. The finale includes cameos from Sacha Baron Cohen, Alexander Skarsgard and Lindsay Lohan is brilliant and the last ten minutes of the show is absolute perfection. 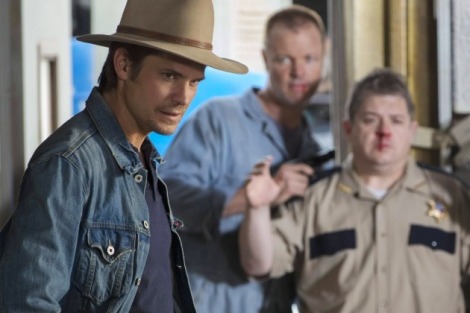 At number 5 is Justified. Season 4 of this richly written and layered show, sees Raylan Givens following up on a DB Cooper style cold case which happens to be connected with his old man who is locked up in prison. Season 4 for me was the shows strongest yet, which was highlighted in the episode ‘Decoy’ and given the show extra room to breathe rather than have Boyd or Wynn as the villains this season.

Walton Goggins continues to impress me with where the Boyd Crowder character is going, Olyphant does some of his best work as a much angrier Raylan underneath the surface and even Tim gets a storyline dealing with fellow ex-army now Crowder muscle Colt.

Laso look out for Patton Oswalt appearance in the show. It’s worth it for Bob.

At number 4 is new NBC series Hannibal. This is my design. As it needed to be, Hannibal had to be dark. Christ I didn’t think it was going to be so physiologically so.

Already in cult like status, which will hopefully improve the second season ratings when it returns, we see Will Graham being sent to Hannibal Lecter to be evaluated of his mental condition after he puts down a serial killer. Intrigued by Will’s method of being inside the killers mind (which take its toll on Will as the season progresses), Hannibal takes shine to him but sometimes has his own agenda on how to use Will.

Beautifully shot and Mads Mikkelsen’s excellent turn as Dr Hannibal Lecter, if you have a strong stomach, I encourage you to get viewing Hannibal as soon as you can. If you’ve watched it already, try catching the little dots that connect everything together.

At number 3 is CW Series Arrow. Yes it’s on the CW and yes it is a comic book show. If you happen to be watching a particular comic book show and aren’t watching this, I am currently questioning your judgement.

Arrow is currently in the middle of it’s second season and normally when a show has had a good end run in it’s first season, like Arrow, they tend to get lost slightly in it’s second year. With Arrow this is not the place.

After the end of season one with the ballsy play of having the villain win (yep, you read that right) and losing one of the main characters, the show has extended the comic book catalogue available and is literally bringing everything to the table in terms of story and how quickly it progresses and yet it’s all connected. Even the flashback episodes are connected to the main story in some way and still continue to be interesting.

The characters are more layered (bar Laurel for some reason), the trio of Amell, Ramsey & Rickards play off each other well (Olicity moments to be had) and Manu Bennett as Slade Wilson….enough said. The fight scenes are well done.

Basically Arrow is the best live action comic show that’s been done and can’t think of a show that’s vast improved from Season 1 to 2 so much, the main comparison I can come up with is Buffy The Vampire Slayer. Yeah, I went there.

I continue to be impressed with Amell as Oliver, so much so he’s got my support to be the Green Arrow in the Justice League film, discussed here. 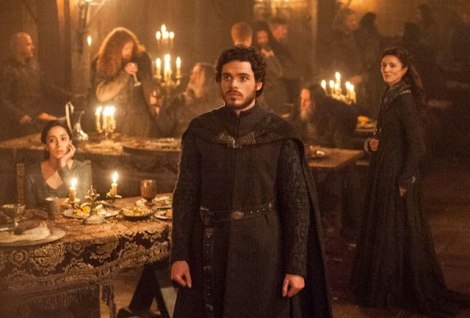 At number is HBO’s Game of Thrones. After the Red Wedding, things won’t be the same. It’s not like nothing else happened in Season 3, Khaleesi was starting to own shit with her dragons and gather an army and a following, Jamie Lannister came into a slight problem which has changed him as how we viewed him as a bad guy, Jon Snow is with the Wildlings and still knows nothing and Theon is having a really REALLY bad time throughout all of this.

But everyone was and still is talking about the events that take place leading to the season 3 finale. You felt something was off. Then you witness it all drag out in front of you…for what seems like a long time….yet it keeps going.

The cast are as good as always but the key player this season has been Michelle Fairley. It’s the darkest moment in the show so far. Will it ever be matched?

At number 1, as if there was any doubt, was the final season of AMC’s Breaking Bad. All roads led to the great Heisenberg’s downfall, but no one predicted the way some of the events turned out.

Walter is out of the empire business but is urged to come back as his product is currently getting botched and isn’t at the Heisenberg level. Cue creepy Todd and the crazy uncle and the gang entering the fold to help out Lydia with the problem…and cause havoc to everything that Walt holds dear. His family and his legacy.

We should really REALLY hate Walter at this stage of the game but Bryan Cranston plays him so well and still in his crazy deluded mind has the code set of doing it for his family…until the end that is.

The biggest turn here is Dean Norris as Hank and gives us some of the best performances in the series leading to the dramatic conclusion in one of the best television episodes to air in Ozymandias.

Everyone brought their A-game to the table, some people didn’t like the way Jesse ended up going against Walt in the final season but there’s only so much you can do to one person before that eventually snap on you. The finale itself wrapped up perfectly and the final shot sealed close on one of the greatest television shows to grace our presence and unfortunately there will be nothing like it….unless you plan to watch the South American (and appears shot for shot) remake. Got a problem with that? Then Better Call Saul is your next best bet.