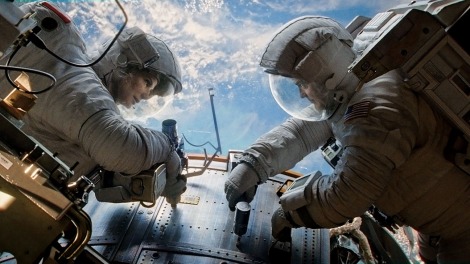 A medical engineer and an astronaut work together to survive after an accident leaves them adrift in space.

Gravity takes us right into space where bio-medical engineer Dr. Ryan Stone is a Mission Specialist on her first space shuttle mission, STS-157. She is on a spacewalk repairing a panel on the Hubble Space Telescope, accompanied by veteran astronaut Matt Kowalski, who is commanding his final expedition. Mission Control suddenly instructs them to abort their spacewalk and return to the STS. Houston tells them that debris from a Russian missile strike on a defunct satellite has caused a chain reaction, destroying other satellites, and a huge debris field is heading right at them. Then shit hits the fan with debris wrecking the shuttle and taking out all the crew except Stone and Kowalski, which Kowalski decides they have to reach the ISS before 90 minutes to get a pod to head back to earth or be caught in the debris field again.

Well this may prove to be an unpopular but I managed to find Gravity rather….underwhelming. Visually it is stunning to look at but visuals can only do so much when the dialogue and the characters aren’t given the same level of detail. In space we have George Clooney as an astronaut that happens to be like George Clooney and Bullock…where do we begin. Dr Ryan Stone, to be fair, would be in some duress throughout the proceedings of space debris forcing her into these positions of high risk, but the film puts you into moments of unbelievability and when she starts playing eeny meeny money mo with a Russian control panel, that irritated the shit out of me, even though the manual was there and later she can read the Chinese one perfectly fine.

I admire the dedication that went into the overall spectacle but with the hype, the praise and the nominations, I expected a hell of a lot more out of it. Still the opening scene is worth the watch before it heads into Open Water in Space territory with some Kubrick nods and Wall E reference to boot.

Such a disappointment that starts off well with the one shot at the start then goes downhill shortly after. Great visual spectacle let down by a bare script. 5/10