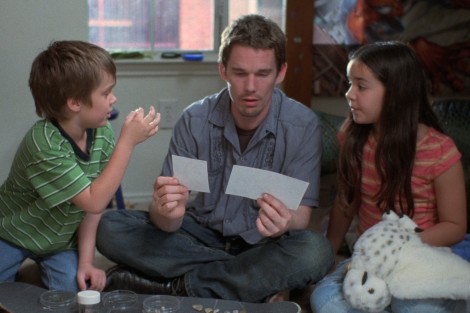 We follow the life of a young man, Mason, over the course of twelves years, from a kid to college freshman. 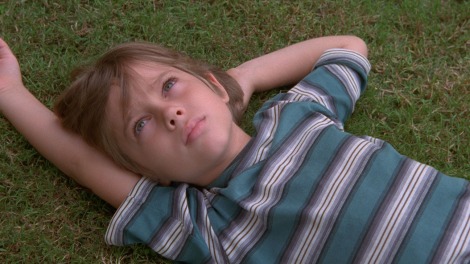 Boyhood is the ambitious project of Richard Linklater’s script brought to life in this almost three hours long tale about a young boy named Mason and we witness how he grows up into his own as the film progresses.

Mason lives with this mother (Patricia Arquette) and his sister Samantha (Lorelei Linklater), his father Mason Sr. (Ethan Hawke) is still around but him and his mother aren’t together. Through the years we watch this family change dynamic with new partners for the parents and the stories that go with it unfold through the eyes of Mason and also how these moments and milestones affect him.

It’s odd to review a film like Boyhood without giving much away, but really there is no film quite like Boyhood out there. Linklater began shooting this film from 2002 up until last year, merging, as he called it, these short films over the course of 12 years and putting them together as a feature film. With that and keeping the same actors throughout, the film feels so organic, like you are literally watching this family grow up and when certain things go down, you actually feel some kind of emotion toward them.

There is no overall structure narrative of Point A to Point B in terms of carrying an overall plot throughout the course of the film, because it’s not that kind of film. It’s just us catching a glimpse of Mason going through these simple moments/milestones in his life, some of them could view them as utterly meaningless yet looking back, they could mean everything as to building Mason’s character. The final ten-fifteen minutes of this film captured that perfectly and it’s telling for a film that is almost three hours long, you want to know what happens to Mason next. Maybe Linklater will pull a ‘Before Trilogy’ and let us come back ten years or so later to see what Mason gets up to in manhood.

Ellar Coltrane comes into his own as an actor in this film as he gets better the more he gets older and matures, of course, Patricia Arquette and Ethan Hawke are solid in the roles of the parents and Linklater’s daughter, Lorelei, does well as Samantha. The film is well directed, the supporting cast are well done as you have different emotions towards them (good and bad). Does the story have its flaws? Sure, but for me it adds to the charm, the almost complete normality of it all.

A stunning cinematic achievement from Richard Linklater, a charming glimpse into the childhood of Mason and when you want to see just a bit more of what happens to him at the end of a film, that is almost three hours long, you’ve created something special indeed.  10/10

One response to “Film Review – Boyhood”