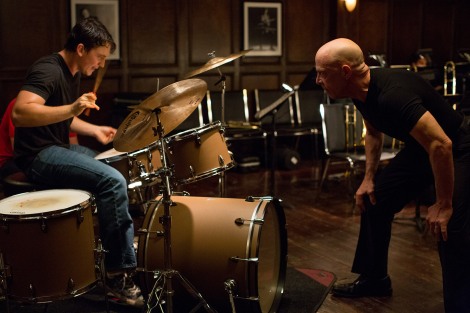 A promising young drummer enrolls at a cutthroat music conservatory where his dreams of greatness are mentored by an instructor who will stop at nothing to realize a student’s potential.

Andrew Neiman is a young jazz drummer who aspires to become ‘one of the greats’, keenly listening to the likes of Buddy Rich as inspiration. While he’s accepted into the best music school in the US, the Shaffer Conservatory, hoping to catch the attention of the infamous conductor Terence Fletcher, who is looking for a drum alternate. During a class band session, Fletcher enters the class and each one ‘auditions’ for him and Neiman is successful. While initially Fletcher comes across as nice, it becomes clear that Fletcher is a master manipulator and abuses, berate members of his class, hoping to find someone in his mould that can become ‘one of the greats’. What follows next is a case of how far is too far to achieve greatness?

Still soaking up the energy of the performances and the film itself from a screening a few hours ago I can already put this statement out there: – If I see a film that happens to be better than Whiplash, then 2015 is a terrific year for film. The film brings to life abuse of power and obsession in a way that I haven’t seen in a long time. Damien Chazelle finally got to make this film length feature (originally he couldn’t get funding, so he done a short film of Whiplash back in 2013 for the Sundance Film Festival, which ended up winning the Short Film Jury Award and the rest is history) and really cranks up the tension with the class scenes and especially in the competition performances that Andrew comes to the front and you tense up every time Fletcher glances over at him, waiting for something to go wrong in an instant. Taking this student/mentor film and making it an abusive thriller, mostly handling the obsession and ambition that Andrew and Fletcher have within themselves: Andrew, seeking to gain the approval of his talent by Fletcher, we witness the effort he puts in only to be teared about in mere seconds come the next class comes around, he literally eats and sleeps music the band performs. Fletcher on the other hand seeks on going to extreme measures to mould his own ‘Charlie Parker’, one that many may refer to him as one thing…an egomaniac.

The film comes with terrific performances from its lead stars, starting off with Miles Tellers bringing actual blood, sweat and a single tear to his performance that is as raw as I’ve seen him yet. I can understand why some might be initially turned off by Miles Teller for previous films he’s appeared in (particularly in the comedy genre), but with his performance in The Spectacular Now and now Whiplash, he is definitely one that can take off now as a future indie starlet with these kinds of roles….though we’ll see how he and The Fantastic Four have to say about the matter. As terrific as Tellers performance is, really the man that brings forward some of the most memorable quotes of tearing someone apart since Sergeant Hartman from Full Metal Jacket is JK Simmons as Terence Fletcher. In an alternate universe, Vern Schillinger did not get placed into prison but instead decided to mentor the future musicians of the jazz world, yet was still as verbally and emotionally manipulative as his namesake, there you have Terence Fletcher. Simmons really digs deep into this performance, you quite literally hang on his every word and twitch of his hand, wondering where the scene is going to go next and yet, for all the abuse that he dictates to his students, you can still understand his methodology of pushing them to their full potential, though maybe not to the extremes that he goes to. I would be absolutely stunned if JK Simmons doesn’t win an Oscar for this role. Stunned.

I LOVED this films tempo, with a Oscar worthy performance from JK Simmons and a terrific performance from Miles Teller as well, making a statement on why he is one of the best of the young actors today and with the obsession and ambition that the film builds it lets it go out with a bang of a finale, which quite possibly might be my favourite final fifteen minutes to an end of a film I’ve seen in some time.  I’ll be very curious to see what Chazelle does next.  10/10

One response to “Film Review – Whiplash”