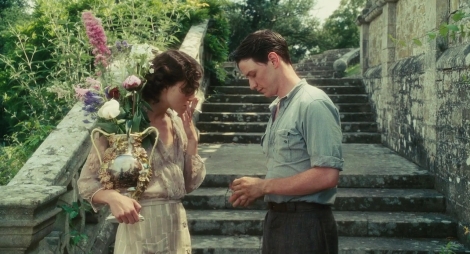 Fledgling writer Briony Tallis, as a 13-year-old, irrevocably changes the course of several lives when she accuses her older sister’s lover of a crime he did not commit.

When a young girl, Briony Tallis, who is an aspiring writer, misinterprets a few chance encounters that her older sister Cecilia with Robbie Turner have, sets into motion a series of misunderstandings that will change the course of their lives on one night that Briony’s cousin Lola is raped, she tells the police that it was Robbie that committed the deed.

Anyone that knows me knows how hard of a sell a romantic film and a period film are to gander my interest, especially when putting the two genres together, but after the word of mouth of hearing how great Ian McEwan’s novel of the same name the film is based on (faithfully from what I heard) I decided to give it a chance. Joe Wright has created a powerful and beautiful looking film in Atonement. I can recall one of my teachers who made us watch this during an afternoon at a film course I done in College and stated that “the cinematography is just too beautiful” and looking back I would have to agree completely. The first half of the film lets us witness the romance begin to come to fruition between Cecilia Tallis and Robbie Turner, despite their difference in the order of social class, there’s a powerful connection between the two of them. Then we have Cecilia’s younger sister Briony witness a two key moments that Cecilia and Robbie have, misinterprets one moment at a fountain between the two that Robbie is mistreating her sister and the other is when the two of them, em, become more connected at the library. With Briony having a crush on Robbie and intercepting a letter and these two key moments, her resentment and one event causes her to sink Robbie in a moment that will change all three lives forever. The second half of the film jumps straight to a time of War, with Robbie now in the Army out in France (was either stay in prison or join the army), with Cecilia and a now 18 year old Briony working as nurses in London. Keira Knightley and James McAvoy are terrific on screen together, the chemistry shimmering for us to see and with the fallout of the terrible lie that occurs, the two still stick together and attempt to reestablish the connection that they once had, with McAvoy particularly in one scene between the two at a restaurant before he goes to France you can feel the emotional and despair when he realises how much time he has with Cecilia. It’s one simple moment but played brilliantly by McAvoy, who is terrific in this film, as is Keira Knightley as his love Cecilia.  Romola Garai does really well as the older Briony but the films highlight comes from Saoirse Ronan as young Briony, with a performance that’s older than her years that earned her an Oscar Nomination. The ending is something originally I should’ve seen coming, but it packs a punch.

FAVOURITE SCENE: The single shot around Dunkirk beach which becomes all the more haunting every time you see it, thanks to the imagery and Dario Marianelli’s score.

FAVOURITE QUOTE: ‘I’d like to think this isn’t weakness or… evasion… but a final act of kindness. I gave them their happiness..’ – Briony Tallis

DID YOU KNOW?: Shooting the five minute Dunkirk beach scene was arguably the toughest portion of shooting. The shooting schedule dictated that the scene must be completed in two days, because the crew has limited time with the 1,000 extras. However the location scouts report indicated the lighting quality at the beach was not good enough until the afternoon of the second day. This forced director Joe Wright to change his shooting strategy into shooting with one camera. The scene was rehearsed on the first day and on the morning of the second day. The scene required five takes and the third take was used in the film. On shooting, Steadicam operator Peter Robertson shot the scene by riding on a small tracking vehicle, walking off to a bandstand after rounding a boat, moved to a ramp, stepped onto a rickshaw, finally dismounting and moving past the pier into a bar.