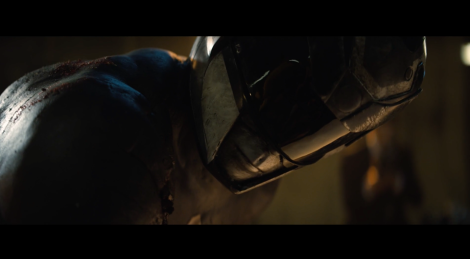 Lionsgate are still working on getting the nuts and bolts for the Power Rangers film before production begins but thankfully for us, director Joseph Khan has brought us a little something to keep us occupied until then with a dark and gritty (and also bloody) under 15 minute short film simply called Power/Rangers.

It’s weird to follow the words Power Rangers with dark and gritty in the same sentence but that’s exactly what this short film is, with Joseph Khan giving us a version we’ll never see in the upcoming PG-13 (safe to assume that’s what it’ll be, right?) Power Rangers film from Lionsgate. Adi Shankar (Dredd, Lone Survivor, The Grey) also produced this short film and has the likes of James Van Der Beek playing former Red Ranger Rocky and Katee Sackhoff as original Pink Ranger Kimberley, giving us a look into what happens to Tommy, Jason, Kimberley, Billy, Zack and Trini after an intergalactic war and someone is taking them out one by one.

Personally I’m absolutely surprised by this take and love it’s interpretation of it. It’s a terrific job from Joseph Khan and the team here, in particular the fight choreography that’s used in the scene between Zack and General Klank (spelling could be off) and the VFX is very well used here (particular highlight being Tommy’s Green Ranger armour). All the while I’m interested in what Adi Shankar attaches his name onto next as it’ll instantly have me curious to have a glance at the next project. To here what Joseph Khan had to say about the project, you can check out his interview with HitFix and you can hit up the official Facebook also.

Here’s the NSFW edition of Power/Rangers:

One response to “POWER/RANGERS”