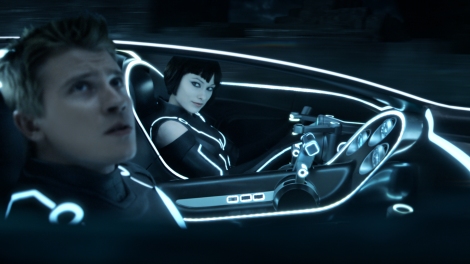 Yesterday news was broke by The Hollywood Reporter that actors Garrett Hedlund and Olivia Wilde will reprise their characters from Tron: Legacy for the upcoming Tron 3 film.

Disney’s Tron 3 (which some believe is to be called Tron: Ascension) is to be directed once again by Joseph Kosinski, who helmed the 2010 sequel to the 1982 original sci-fi film that took place inside a computer world known as ‘The Grid’ and starred Jeff Bridges and Bruce Boxleitner, which gathered a huge cult following. The sequel revisited that world, this time with the story focusing on Jeff Bridges character’s son (Garrett Hedlund) who jumped into ‘The Grid’ to find his father and happened to algorithm-made-flesh Quorra (Olivia Wilde) along the way. Though it was hardly a critical success, Tron Legacy ended up making $400m worldwide and is set to begin shooting in the fall in Vancouver.

Though not much plot details have been given yet as to where Tron 3 will go exactly, I honestly wouldn’t mind checking out a third Tron film as I didn’t mind Legacy. It looked good, had some nice ideas but the overall execution was….slightly dull…and the less said about CGI Jeff Bridges face the better I guess, that was just some creepy shit. As for Hedlund and Wilde returning that’s a positive step at least. Can we bring Daft Punk back for the soundtrack?

One response to “Tron 3: Garrett Hedlund And Olivia Wilde Returning”