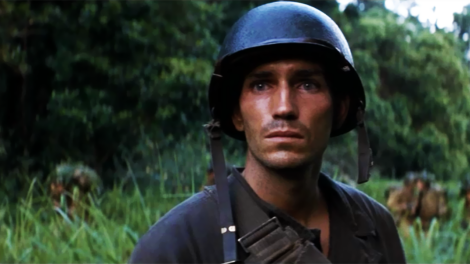 Adaptation of James Jones’ autobiographical 1962 novel, focusing on the conflict at Guadalcanal during the second World War.

The Thin Red Line takes place in World War II, focusing on the battle in the South Pacific island known as Guadalcanal. The United States Army bring in a division of young soldiers in to break the last resistance of the Japanese, with the battle being told from several perspectives.

The Thin Red Line is not only just an interesting take on the perspective of war, but it’s also one of the most beautifully shot war films I’ve ever seen. In my mind it should have won that Oscar for Cinematography at the time but unfortunately for the film, it just happened to be released the same time as Saving Private Ryan. The Thin Red Line gives us an emotionally philosophical take on war, showing the beauty and destructive force of nature itself whilst in the midst of this battle where we follow these young group of soldiers that are thrown into the lions den not just for their country, but by Lieutenant Colonel Tall who sees this as his chance to move up the ranks after years of studying war and sees his men almost as cannon fodder in order to accomplish his goal, no matter the cost of lives in order to make a men for himself (well, this is what I took from it) and Nick Nolte gives the best performance for in me in the film as Tall. At the time the biggest names (John Travolta, Woody Harrelson and George Clooney) had little screen time and the film was taken up by relative unknowns that have now become a who’s who on the big and small screen. The other stand out performances come from Elias Koteas, Jim Caviezel and Sean Penn. The theme of nature told in the backdrop on the destruction nature of man in a poetic way is what makes The Thin Red Line stand out from other war films.

FAVOURITE SCENE: Captain James Staros and Lieutenant Colonel Tall reach a stalemate on how to attack the enemy.

FAVOURITE QUOTE: ‘Everything a lie. Everything you hear, everything you see. So much to spew out. They just keep coming, one after another. You’re in a box. A moving box. They want you dead, or in their lie… There’s only one thing a man can do – find something that’s his, and make an island for himself. If I never meet you in this life, let me feel the lack; a glance from your eyes, and my life will be yours.”’ – First Sgt. Edward Walsh

DID YOU KNOW?: Billy Bob Thornton recorded a narration for the three-hour-plus epic under the supervision of director Terrence Malick. However, the final print of the film has voice-overs by eight of the main characters in the film; none of the narration from Thornton is in the final print. In addition, several other stars who filmed scenes were left on the cutting-room floor, including Bill Pullman, Gary Oldman, Lukas Haas, Viggo Mortensen, Martin Sheen, and Mickey Rourke.