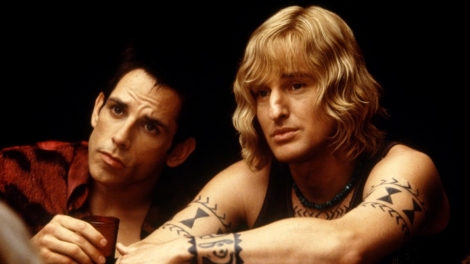 At the end of his career, a clueless fashion model is brainwashed to kill the Prime Minister of Malaysia.

We follow Derek Zoolander, a three time ‘Male Model of the Year’ who finds himself in a state of identity crisis as he’s beaten by hot newcomer Hansel and his close friends die in a freak gasoline fight accident, he starts searching for a new meaning in his life. However fashion guru Mugatu plans to turn Derek’s career around to be the face of his new ‘Derelicte’-line. Unknown to Derek however is that Mugatu plans to brainwash him to kill the Prime Minister of Malaysia.

Zoolander is one of those comedies for me that just gets dumber and funnier the more I watch it. Highly quotable (even now fourteen years later) and with some memorable scenes, though some jokes are outdated now in terms of pop culture, Zoolander on paper has a simple plot but doesn’t outstay its welcome thanks to the other plot of the rivalry between Zoolander and Hansel and the chemistry between them. The fact that Stiller had written these characters to be so dumb, it’s a testament to how likable they are regardless and focused in an attack on image culture, heightened by an over-exaggerated plot of a fashion guru looking to brainwash a model for an assassination of the Prime Minister of Malaysia to let a group of shadowy figures within the fashion industry continue their trade untouched through the use of child labour. With some memorable cameos (including David Duchovny in Mulder-esque form breaking down the fashion conspiracy) and a sound supporting cast, Zoolander is worth viewing.

FAVOURITE SCENE: Derek and his pals enjoying their orange mocha frappuccinos and then get into a gasoline fight…with disastrous consequences.

FAVOURITE QUOTE: ‘What is this? A center for ants? How can we be expected to teach children to learn how to read… if they can’t even fit inside the building?’ – Derek Zoolander

DID YOU KNOW?: Derek’s repetition of the line “But why male models?” for the second time in the cemetery scene was an ad-lib by the actors; Ben Stiller forgot his line and simply repeated the earlier line again, and David Duchovny ran with it and gave him a straight answer.