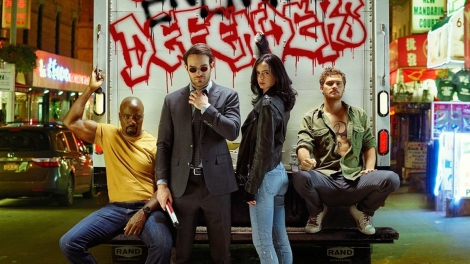 Netflix have released the official trailer for their upcoming series Marvel’s The Defenders.

The synopsis is as follows:

Marvel’s The Defenders follows Daredevil, Jessica Jones, Luke Cage and Iron Fist. A quartet of singular heroes with one common goal – to save New York City. This is the story of four solitary figures, burdened with their own personal challenges, who realise they just might be stronger when teamed together.

The Marvel Netflix Universe has been around now the last couple of years and for the most part I’ve enjoyed the standalone shows that have come out. Daredevil has been great, Jessica Jones was really good, Luke Cage was solid and Iron Fist….I’ve still to go back to and finish. One thing that everyone will agree on is that the thirteen episode format hurts the shows equally and thankfully this series will only have eight episodes. I liked the use of Nirvana’s ‘Come As You Are’ with the footage, it just fitted so well. It looks set to give us another fight sequence in a hallway, because a Marvel show on Netflix needs at least one of them and I’m interested to see how Sigourney Weaver fits into this universe.

Marvel’s The Defenders will be available on the streaming service on the 18th August 2017.