After the apes suffer unimaginable losses, Caesar wrestles with his darker instincts and begins his own mythic quest to avenge his kind.

After the events of Dawn For The Planet Of The Apes, Caesar and his apes are forced into a deadly conflict with an army of humans that are led by a ruthless Colonel. After the apes suffer unimaginable losses, Caesar wrestlers with his darker instincts and goes on a journey to avenge his kind, pitting him against the Colonel in an epic battle that will determine the fate of both their species and the future of the planet. 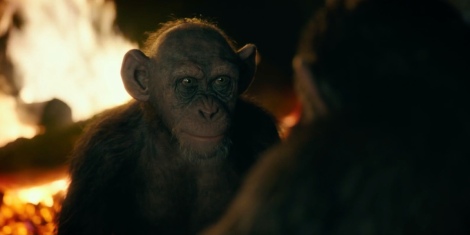 In 2011 the Planet of the Apes franchise was rebooted and we were introduced to scientists testing a viral-based drug on chimpanzees and also an intelligent infant chimp named Caesar. The 2014 followup, Dawn of the Planet of the Apes, we learn that the viral-based drug manifested into the Simian Flu has massively reduced the human population and Caesar is trying to maintain dominance of his community of intelligent apes and trying to stop a potential war between apes and humans. Unfortunately for him however, one of their own named Koba sparked an event that would lead to the arrival of the human military and we arrive two years after the end of Dawn for War for the Planet of the Apes, where Caesar is almost a mythical figure to the humans as they haven’t seen him for themselves for so long they believe he’s dead. As the apes are attacked and suffer heavy losses however, Caesar decides to confront the Colonel which leads to a confrontation that will determine the fate of their species and who will rule the Earth.

This current take of the Planet of the Apes franchise has had me riveted and invested in during this decade and it’s primarily due to the character journey of Caesar. We witnessed him growing up under human care and coming to understand his fellow apes, then we followed his journey in leading an army of apes and having to deal with conflict within his community as well as his leadership qualities in attempting to maintain order between ape and man. Now we follow Caesar in his darkest hour, in battling for his tribe and his soul as one man, The Colonel, a renegade military leader that’s made it his sole purpose to terminate ape kind with extreme prejudice. Rewatching Rise and Dawn before seeing this film has made the experience all the more satisfying in watching Caesar’s journey and witnessing him toughened by war and being haunted by loss and guilt as we see him entering a grey area where he makes decisions that in previous films he would never make, leading to some of his close friends even telling him that he’s starting to remind them of someone familiar….Koba. Andy Serkis is utterly terrific as Caesar and provides one of the most memorable characters this decade which should be recognised by the Academy but I highly doubt it. The trailers gave us hints about apes working with the military and the way that sub-plot is handled makes sense and actually generates an interesting character in a gorilla named Red, who not only helps the humans to attack his kind but to also enslave them. While the film deals with dark themes and has bleak undertones within a setting that feels like a nod to old War and Western films before it, Steve Zahn’s  former Zoo chimpanzee Bad Ape is introduced into the franchise to provide levity at the right moments, even though there’s a sad history to his character. Woody Harrelson is a solid foil to Serkis’ Caesar as the Colonel, a man that expresses his purpose to cleanse the disease that has almost wiped out mankind and we understand from his point of view how far he’s willing to go to sacrifice for the human race and that he suspects that every soldier in his ranks is willing to do the same….or else. The cinematography work from Michael Seresin is beautiful to look at here, capturing the natural environment of the woods in various settings of sun, rain and snow and the score from Michael Giacchino works wonderfully within the scope of the film. The film itself is confident in the world it’s creating and the narrative it’s telling and that’s helped by Reeves returning to direct and co-write the script alongside Mark Bomback and it’s helped by the fact that Weta provide stunning special effects work for the apes, who are more expressive than they’ve been before, conveying more emotion across several characters and I still can’t help but be amazed by the attention to detail that goes into the creation of the apes.

The film has no problem in paying ode to the war films that can before but there’s maybe one nod too many in spelling out its influences, as at one point we eventually see graffiti of ‘Ape-ocalypse Now’ which comes at a time when it’s already too much as even Harrelson’s Colonel character is shades of Walter Kurtz. As good as Harrelson’s performance is, his character is slightly cartoonish but that’s primarily due to going a line or two too far especially during a monologue scene shared with Caesar. While I found Amiah Miller’s performance to be fine, her character seems to exist primarily as fan service to those that enjoy the original film. For those coming in expecting an all out summer blockbuster style film due to it having War in the title may be disappointed by the lack of action throughout the initial two-thirds of the film but with the story and then the action-packed finale may make up for it.

If this is indeed to be the last Apes film before we enter the Charles Heston timeline, then I’d say it’s a very fitting and emotionally satisfying conclusion in following Caesar’s journey. While the action is well executed and the special effects are terrific, it’s the story and character development that had me engaged and glued to the screen that I didn’t feel the two hour and twenty minute runtime. As it stands, his 2010’s Planet of the Apes trilogy may just be one of my favourite trilogies of all time. Andy Serkis deserves all the recognition for his performance as Caesar.  10/10