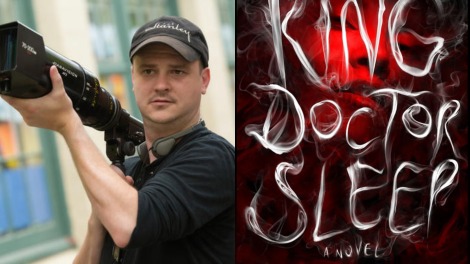 Deadline is exclusively reporting that Warner Bros. has attached Mike Flanagan to direct the film adaptation of Stephen King’s Doctor Sleep, the sequel to The Shining.

The novel, released in 2013, focuses on Danny Torrance carrying the trauma of the events at the Overlook Hotel into adulthood. he’s become a reflection of his murderous father, with lingering rage and a drinking problem that dulls his pain as well as his ‘shining’ powers. His powers return however when he embraces sobriety and uses his gift to help the dying at a hospice. He establishes a psychic connection with a young girl who shares his extreme abilities, and who is being targeted by a scary group with similar abilities that find out that their powers grow if they inhale the ‘steam’ that comes off others with the power to shine when they are suffering painful deaths.

The Shining novel, released in 1977, was adapted for the big screen in 1980, which was directed by Stanley Kubrick and starred Jack Nicholson, Shelley Duvall, Danny Lloyd, Scatman Crothers, Barry Nelson, Philip Stone, Joe Turkel, Tony Burton, Lia Beldam, Billie Gibson, Barry Dennen, Lisa Burns, Louise Burns and Anne Jackson. Warner Bros. made a killing in adapting Stephen King’s It last year, with the film grossing $700m worldwide on a $35m budget, which makes sense as to why the studio is fast-tracking another King adaptation. It makes sense that they’re bringing Mike Flanagan on board to direct after he made a really good film with an adaptation of another Stephen King novel, Gerald’s Game, for Netflix last year. Kevin McCormick will be overseeing the project for Warner Bros.