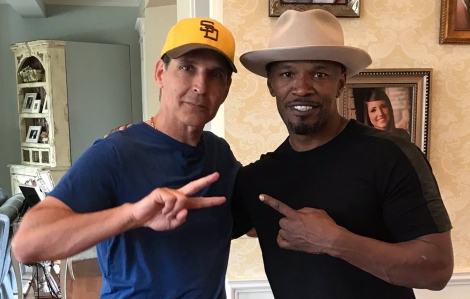 Deadline is exclusively reporting that Jamie Foxx has been cast in the lead role for Blumhouse’s adaptation of Spawn, with Spawn creator Todd McFarlane making his directorial debut.

Spawn focuses on elite CIA mercenary Al Simmons, who is killed by his partner and is sent to hell as he was responsible for the death of several innocent people. Simmons makes a deal for his soul with an evil being known as Malebolgia so he could see his wife again. Unfortunately for Simmons, that deal turns him into a demonic creature and gets sent back to Earth. Spawn is a character that possesses superhuman strength and speed, and near immortality. Spawn also has the ability to teleport, shapeshift, and heal.

Todd McFarlane revealed during a Facebook Live interview with Kevin Smith at San Diego Comic Con last year that he was partnering up with Blumhouse productions to bring the antihero back to the big screen.

Speaking with Deadline, Todd McFarlane doesn’t intended to tell Spawn’s origin story and he expects his anti-hero to be a man of few words. McFarlane said:

The scariest movies, fromJaws to John Carpenter’s The Thing, or The Grudge and The Ring, the boogeyman doesn’t talk. It confuses people because of the comic book industry, and because they all default into their Captain America mindset and I keep saying, no, get into John Carpenter’s mindset or Hitchcock. This is not a man in a rubber suit, it’s not a hero that’s going to come and save the damsel. It’s none of that. At the end of the movie, I’m hoping that the audience will say either, is this a ghost that turns into a man, or is it a man that turns into a ghost? I’ve got a trilogy in mind here, and I’m not inclined in this first movie to do an origin story. I’m mentally exhausted from origin stories. Luckily, there’s a movie that just came out that helps my cause. In A Quiet Place, the first thing on screen is a card in black and white letters that says Day 89. It doesn’t care about what happened in those first 88 days. There are a couple headlines, but then we are on day 450. That movie doesn’t worry about explaining and giving all the answers. What it said in that case was, if you can hang on for a story of survival of this family, this movie will make complete sense for you. If you want to see something creepy and powerful where you go, just what the hell was that? I’m not going to explain how Spawn does what he does; he is just going to do it. We’ll eventually do some of the background if we make a trilogy, but that’s not this first movie. The first movie is just saying, do you believe? And if you believe than that’s good because I’m hoping to take you for a long ride with this franchise.

Talking about casting Jamie Foxx and keeping his dialogue to a minimum, McFarlane said:

Jamie came to my office five years ago, and he had an idea about Spawn and we talked about it. I never forgot him, and when I was writing this script, you sort of plug people in, and he was my visual guy and I never let go of him. When I got done and my agents and everybody was talking about what actor, I said, I’m going to Jamie first and until he says no I don’t want to think about anyone else because I’ve never had anyone else in my head. Luckily, he hadn’t forgotten either. I said, ‘Hey, I’m back to talk aboutSpawn again, and he was like, let’s do it.’ There are five or six moments where I’m going to need things from my actors, and a couple of them have to come from Jamie, and I’ve seen him deliver them onscreen. He gets into a zone, with body language and a look that basically will say way more than anything i could type on a piece of paper, and this movie is going to need those moments. And in the odd moment where he has to deliver a line that’s short, curt and has impact, he can do it in a way that makes you go, ‘Whoa, I don’t want to mess with that guy. What a badass.’

We are thrilled Jamie Foxx will be playing the title role in our movie adaptation of Spawn. He is an incredible actor and a huge fan of the Spawn Universe that Todd McFarlane created. With the depth of talent Jamie can commit to the role and Todd at the helm bringing the world of Spawn to life, we could not be more excited for this film.

A few years back I flew out to Arizona to meet the man behind one of the most incredible comic book characters in the universe… Todd McFarlane. He was taken aback when I told him with the enthusiasm of a young child that more than anything I wanted to put my name in the hat to embody his beloved characterSpawn…. I told him no one would work harder than me if given the opportunity… well… the opportunity is here!! I’m humbled and ready to transform… and to top things off the young Jason Blum is lending his brilliance to the project! Time to be great!!!! #Spawn.

There’s no cinematic release date as of yet for Spawn.

One response to “Spawn: Jamie Foxx Cast As Lead For Todd McFarlane’s Adaptation At Blumhouse”