Two lifelong friends head up to an isolated Scottish Highlands village for a weekend hunting trip. Nothing could prepare them for what follows. 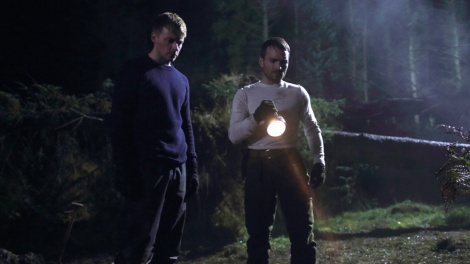 Calibre focuses on two lifelong friends, aggressive businessman Marcus, taking his friend Vaughn, whose fiancé is pregnant, on a hunting trip to a remote village in the Scottish Highlands. As the two of them make their introductions to locals in the village, an accident leads to increasing danger and problems that could Marcus and Vaughn’s lives at risk. 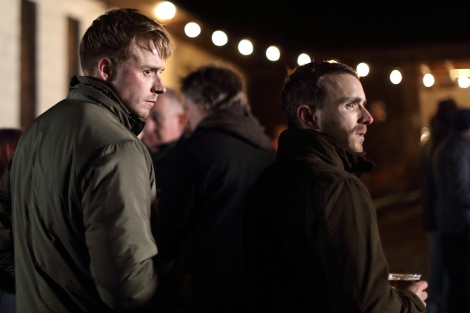 Calibre is a film that marks the directorial feature debut of Matt Palmer, who also wrote the screenplay for this thriller set in the Scottish Highlands. The film focuses on Vaughn, a regular fella living in Glasgow that is about to become a first-time father with his fiancé. Before the next chapter of adulthood begins for Vaughn, he agrees to go on a hunting trip in the Scottish Highlands with his friend Marcus, who he’s known since his boarding school days and is now a financial advisor. After spending the day and night socialising with the locals, the two venture out to the woods with their rifles and hangovers and things start to go horribly wrong as an accident occurs.

I thoroughly enjoyed Matt Palmer’s direction in Calibre, as well as his screenplay in general. Once the accident occurs, there’s a sudden suspense of paranoia, for the viewer, of how the locals treat Vaughn and Marcus, even though their keen hospitality is due to learning of Marcus’s occupation as a financial advisor. There’s a local community parallel between two villagers, with one keen to treat the urban guests to a good time in order to have one of them put a good word in for bringing investment to an area deprived of it, whilst another is more keen on the community looking after themselves and their land. It’s not the main focal point of the film, but one that provides emphasis on the urban/rural divide between Scots and adds of level of suspense as Vaughn and Marcus stay in order to maintain face, even though they want to get out of dodge. Without giving much away as to what the accident is, it is a shocker and leaves Vaughn and Marcus in an position of facing the consequences or cover it up. Palmer’s direction toys with the audience as much as Vaughn and Marcus, as it flirts with the cliches known within the horror genre, even hinting that the film could cross into the path of The Wicker Man, though that’s primarily due to Tony Curran’s presence as Logan McClay, who appears as a likeable villager though due to his roles in the past, you can’t help but feel that there’s something more sinister about him and Palmer knows this and plays with the audiences expectations. The film however is more of a psychological thriller, with two characters trying to be smart in covering their tracks, feeling a sense of paranoia that someone may be watching them or one word slip-up may ruin their lives. The cinematography from Márk Györi is really good, particularly in capturing the Scottish landscape in the first act, to how certain scenes are shot in dark rooms with a little bit of light. The performances from the two leads are really good here. Jack Lowden is terrific as Vaughn, while Martin McCann provides an ever-reliable presence on-screen as the cunning Marcus. Tony Curran is also very good as Logan McClay and, even with his limited time on screen, Ian Pirie makes a menacing impression as Brian McClay.

I think some viewers might think the film takes too long to get to the accident and events that escalate beyond that, as the film is methodically slow in building to that moment by establishing the main characters and a few of the villagers that appear during the course of the film, and the films final shot may divide audiences on how effective it is.

Calibre is a very effective Scottish psychological thriller with great cinematography work from Márk Györi, solid performances from co-leads Jack Lowden and Martin McCann, and an impressive directorial feature debut from Matt Palmer. Definitely worth you’re time checking it out on Netflix and best to watch without seeing the trailers first. 8/10