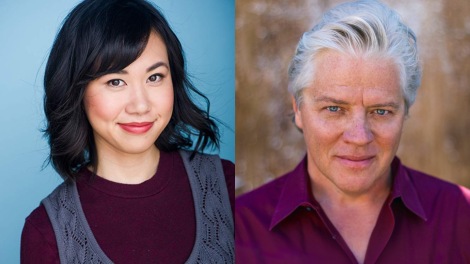 It was announced during the DC‘s Legends of Tomorrow panel at San Diego Comic Con that Ramona Young and Tom Wilson will be joining the cast for the upcoming fourth season.

The official synopsis for the upcoming fourth season is as follows:

After defeating the demon Mallus by cuddling him to death with a giant stuffed animal named Beebo, the Legends are ready to ease off the gas. Sara and her team join Ava Sharpe and the Time Bureau to help clean up the last few remaining anachronisms. The job seems straightforward enough until Constantine arrives to inform them that, in solving one major problem, they have created another, much larger one. When the Legends let time crumble in order to release and defeat Mallus, the barrier between worlds softened. History is now infected with “Fugitives” – magical creatures from myths, fairytales, and legends. Having been expelled throughout time by people like Constantine, these Fugitives are now returning to our world in droves and making a real mess of things. As the Time Bureau is distrustful of and ill-equipped to deal with magic, the Legends must team up with everyone’s favorite demonologist to set history back on track.

Ramona Young (whose credits include Santa Clarita Diet and Blockers) will be playing the role of Alaska Yu, a typical twentysomething easily swept up by romantic notions and fantasy novels, and she’s something of an expert in the world of the magical creatures that the Legends encounter in Season 4. In the company of the Legends, she soon learns to get her head out of the clouds to become a kickass superhero. Tom Wilson (whose credits include the Back To The Future trilogy and Trollhunters: Tales of Arcadia) will be playing the role of Hank Heywood. With a lifetime in the military and Department of Defense, Hank is part of a long line of Heywoods to serve the country. Charming and charismatic, he’s left big shoes for Nate to fill — and it doesn’t help that Nate can’t tell him he’s secretly a Legend! Young will be a series regular, whilst Wilson will be recurring.