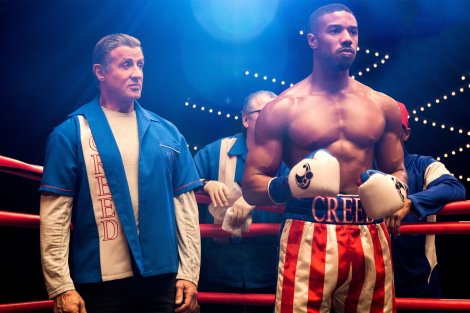 Under the tutelage of Rocky Balboa, heavyweight contender Adonis Creed faces off against Viktor Drago, son of Ivan Drago. 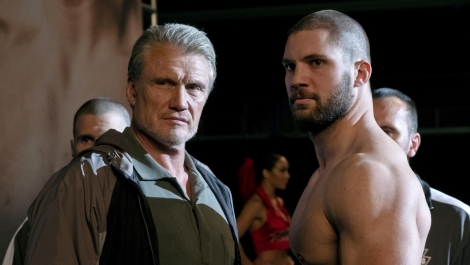 Life has become a balancing act for Adonis Creed. Between personal obligations and training his next big fight, he is up against the challenge of his life by facing an opponent with ties to his family’s past that intensifies his impending battle in the ring.

Creed II is the followup to Ryan Coogler’s 2016 original. Continuing on from where Creed left off, we witness Adonis Creed climb to the mountain top and become the WBC World Heavyweight Championship. Now a worldwide star, Adonis and Bianca begin to map out their future together when a new challenger emerges from the shadows….Viktor Drago, the son of former Soviet boxer Ivan Drago who killed his father Apollo in the ring. The film is not only a sequel to the 2016 film, it also serves as a sequel to the Rocky film that came out thirty-three years ago Rocky IV.

The Rocky IV film is highlighted as being, well not one of the weakest (hey Rocky V!), but definitely the most mocked and looked at as being the point when the franchise went so far removed from where it all started. So to see that story revisited here in Creed II, I felt that the drama of it all was handled surprisingly well. The Drago’s get a lot more meat than I expected them to get in this film here and it definitely plays better here, and also a nice touch, to have Dolph Lundgren be the mouthpiece here for Florian Munteanu like Bridgitte Nielsen was for him in Rocky IV. After all these years Ivan Drago is still simmering with bitterness and anger towards Rocky Balboa, for having lost that bout in Russia all them years ago not only was he left disgraced and disowned by his country, but he also lost his wife in the process. Now, he’s instilled his hatred into his son to achieve this kind of vengeance to defeat Adonis Creed and get back in Russia’s good graces. Dolph Lundgren brings a certain nuance and presence to his performance here as Ivan Drago, which is different to all them years ago and his desire to relive past glories through his son reaches certain levels of verbal abuse. Florian Munteanu is an absolute physical, towering figure here in the film, especially when squared up to Michael B. Jordan, it’s almost as if Munteanu should be put into Game of Thrones to take on Hafþór Júlíus Björnsson’s The Mountain. He’s given limited dialogue but there’s one scene that he has in the middle of the film that I thought he done well with and I actually felt sympathy for the character. What I also liked about the film was the relationship between Adonis and Bianca. The chemistry between Jordan and Thompson is great and their characters relationship feels genuine and their arc takes an interesting, emotional and relatable turn that I felt when watching it. Michael B. Jordan I think gives a better performance here than in the original Creed, showcasing even more vulnerability here as his Adonis’ emotions are all over the place between his relationship with Bianca and having the Drago’s resurfacing and thus everyone keeps bringing up his father’s legacy as well as his death. Sylvester Stallone is still great in the role of Rocky Balboa, who his so far past his former glory and watching him having an arc of trying to reconnect with his son to see his grandson as well as try to not let Adonis’ emotions get the best of him in the lead up to the Viktor Drago fight gives a lot of material for Stallone to work with. Phylicia Rashad is solid as ever as Mary Anne Creed and it’s nice to see Wood Harris get a bigger role in the sequel here as Little Duke.

Creed II follows the same beats as the rest of the films in the Rocky franchise that came before, so if you come in expecting something fresh, it’s revisited material but adding a new coat of paint on it. Some of the writing doesn’t quite work, particularly in how it handles Adonis Creed’s development (the original focuses on him looking to overcome his father’s shadow and goes from brat to man and the sequel….kinda does the same thing) and his motivation for taking the Drago fight, but I feel it’s more to do with Creed II having more writers on the story than the original Creed. While the boxing fights are well captured (and the Viktor POV was a nice touch), it does miss the style it had from the original due to the absence of Ryan Coogler and Maryse Alberti.

While I still prefer the original, Creed II is a solid followup that also handles the Rocky IV angle very well. Michael B. Jordan and Tessa Thompson have great chemistry on screen, Sylvester Stallone is still as good as ever as Rocky, this is the best Dolph Lundgren has been on screen in a while and Florian Munteanu is an absolute physical monster. If Creed II is to be the last installment in this Rocky/Creed franchise, it concludes on a satisfying note but judging by the numbers it’s making at the box office, a Creed III somewhat feels inevitable. 8/10