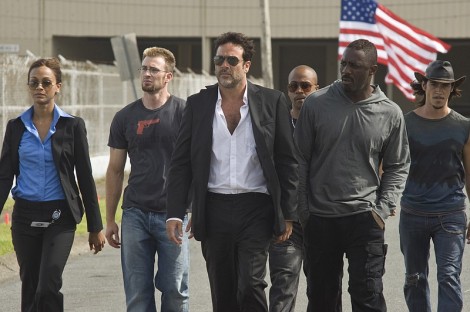 A CIA special forces team are betrayed and left for dead by their superiors, galvanising them to mount an offensive on the CIA. 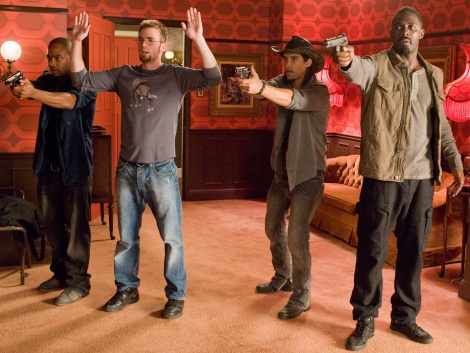 The Losers focuses on an elite black ops team of U.S Special Forces operatives, who are sent to Bolivia on a search and destroy mission of the known whereabouts of a drug lord there. As The Losers go off-script to save children from the compound before an air strike, the team allow the children to be picked up and rescued first, leading to the helicopter being struck down by a missile. Knowing that the attack was meant to kill them, the team fake their deaths and are now stranded in Bolivia, determined to get revenge on the mysterious Max. 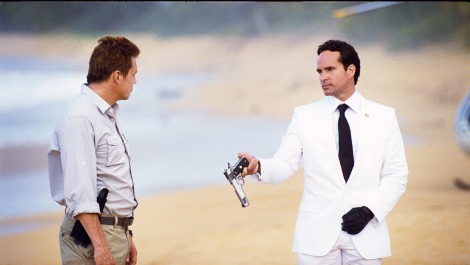 The Losers is a 2010 film adaptation of the Vertigo Comics series of the same name, with Sylvain White at the helm and the script written by Peter Berg and James Vanderbilt. Set in Bolivia, we follow a group of U.S Special Forces operatives (Clay, Roque, Pooch, Jensen and Cougar) on a black ops mission to search and destroy a compound with a drug lord in it. When they paint the target and call in an air strike, they learn that there are children in the compound and try to call off the attack, but their superior named ‘Max’ ignores their pleas. After the Losers save the children from the compound before the compound is destroyed, ‘Max’ destroys the helicopter carrying the surviving children, believing that the team are in it. Knowing the missile was meant for them, the group fake their deaths and are determined to get revenge on the mysterious Max, with the help of the mysterious Aisha, an operative with her own agenda.

One of the biggest takeaways I had with The Losers was the chemistry between the cast. coming off of Watchmen, Jeffrey Dean Morgan is solid in the role of team leader Clay, a man hurting from the deaths of the children that took their place instead of the team and is hellbent on getting revenge on Max. Morgan is charming and sometimes sarcastically deadpan in some of his line deliveries, as well as being a command presence on screen. Chris Evans lets loose compared to his previous roles at the time (Push, Sunshine as Street Kings), returning to his Fantastic Four roots in terms of comedic chops as recon and hacker specialist Jensen. Evans provides the humour, be it ill-timed or socially awkward, and in it works so well in one particular scene in which he infiltrates a software company whilst singing Journey’s ‘Don’t Stop Believin”, with a nice payoff at the end of the sequence. Idris Elba is good as Clay’s second-in-command Roque, who’s tired of living like a ghost in Bolivia, wanting to return home and is sceptical of Aisha’s motives in ‘hiring’ them to help take Max down. Zoe Saldana is really good as Aisha, a woman that looks to the Losers for help to take down Max and we always question what side of the coin she’s actually on as though she might be legit about taking down Max, there’s more to her than meets the eye. Columbus Short has a nice, but limited arc as Pooch, who yearns of returning home as he discovers that his wife is pregnant and whilst limited with dialogue, I rather enjoyed Óscar Jaenada’s performance as sniper Cougar. Jason Patric absolutely hams the scenery up as the villainous Max, a Bond-esque reject villain, whose conversations with his muscle Wade Travis (played by Colt McCallany) provide some of my favourite moments in the film, from “At most that was a break his fingers nod” to “Okay… then we’re saving NORTH America”. Basically everyone seems to be having a good time bouncing off one another here and it’s entertaining to watch how events unfold for us.

Unfortunately, The Losers is not too similar from other mercenary/soldiers of fortune aiming to clear their name flicks that have come before it but mostly the film falls in its final act, in how it feels underwhelming in how certain issues/arcs are resolved and even dares try to set things in motion for a sequel. The biggest sin the film has however is that the majority of its action sequences are too reliant on close shots, quick edits and the majority of the special effects are really bad to look at, even for a film from nine years ago, some of it looks early 2000’s level of bad. The script itself is also pretty weak, which is surprising given the names that penned it.

A predictable yet enjoyable flick with a solid ensemble, a decent enough villain but the film is let down by the final act. Would I have liked to see more of what The Losers got up to though in a sequel? Definitely, there was potential here.  6/10