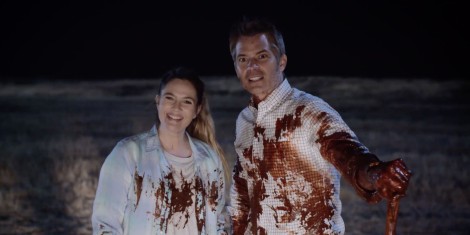 Santa Clarita Diet focuses on husband and wife realtors Joel and Shiela Hammond, who live vaguely discontent lives in the Los Angeles suburb of Santa Clarita with their teenage daughter Abby. One day Sheila goes through a dramatic transformation of becoming a zombie and starts craving human flesh. As Joel and Abby try to help Sheila through this trying time, they have to deal with their next door neighbours being cops, portraying cultural norms and also get to the bottom of a potentially mythological mystery, hoping to discover a cure to turn undead Sheila back to normal.

Santa Clarita Diet has recently released its entire third season over the weekend on Netflix and after having a quiet weekend for a change, I decided to dig into the first season and sure enough I digested it all within a day. I absolutely loved the dialogue in the show, along with its premise, it’s sharp and quick witted, helped on by the deliveries of the lines from the actors/actresses here and I’m not too surprised as to why I enjoyed it so much as I learned that the series was created by Victor Fresco, who also created the criminally short-lived Better Off Ted, which was just as sharply funny as Santa Clarita Diet.

The series looks at a married couple working as realtors and focus on the pair going through a midlife crisis…of sorts, in which turns into a zombie and soon can only eat living human flesh, and the other attempting to support the new lifestyle change whilst brewing everything up and exploding with frustration from time to time. The cast seem to have a good time bouncing off each other here over the ridiculous premise of the show, with Drew Barrymore hilarious as Sheila Hammond, who finds a new lease of life as it were being a zombie, having a new sense of optimism about life and living in the moment, while Timothy Olyphant, more known for his dramatic roles in the likes of Deadwood and Justified, in particular moments has great comedic timing and absolutely provides the right amount of hamming the screen up as Joel Hammond. Liv Hewson is great as Shiela and Joel’s daughter Abby Hammond, whose trying to come to terms with her zombie mothers lifestyle as well as try to lead a normal teenage life. Then there’s Skyler Gisondo, whose great as the dorky, sometimes socially awkward teen from next door Eric Bemis. While the show is bright and comedic in tone, it doesn’t stop it from showcasing some gore, particularly in the opening episode, but it’s not as gory the rest of the way through it in terms of blood, but there is some foots being ate to be seen (with $400 for a dead foot being the going rate!) along with some flesh smoothies during a woman’s power walk, but it’s tame say compared to the likes of The Walking Dead, Shaun Of The Dead and Romero’s Living Dead series from causing unsettled stomachs. With the first seasons 27-30min runtime for each episode, it does feel like it’s trying to have too many sub-plots going on by the halfway point of the season, before cutting off some arcs and focusing on the mythology of how did this zombie virus start and if there is a potential cure for it.

A fine piece of television with a zom-com filter and is easily bingeable and with great performance from its main cast including Drew Barrymore, Timothy Olyphant, Liv Hewson and Skyler Gisondo. It’ll be interesting to see how Fresco and Co. develop this show in the second season.  8/10