DIRECTED BY: Alex and David Pastor

Four friends fleeing a viral pandemic soon learn they are more dangerous than any virus. 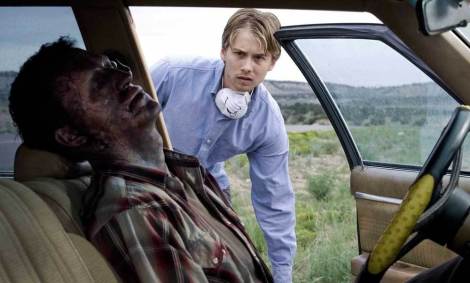 An infectious virus has spread worldwide, killing most of the population. Two brothers, Brian and Danny, along with Brian’s girlfriend Bobby and Danny’s school friend Kate, are heading to Turtle Beach in the southwestern United States, a secluded beach motel where they believe they can wait for the viral pandemic to die out and eventually start a new life. To help them survive, they follow a set of rules created by Brian.

Carriers is a post-apocalyptic film from Àlex and David Pastor that focuses on a group of four people surviving in a world where an infectious virus has spread across the country, wiping out most of the population of America. Two brothers, Brian and Danny, along with Brian’s girlfriend Bobby and Danny’s school friend Kate, are heading to the coast of Turtle Beach, where they used to go as kids and believe they can start a new lie there and wait for the viral pandemic to die out. The journey is long and in order to help them survive, they follow a set of rules created by Brian.

I will commend the Pastor’s for focusing on the humanity and darker survival instincts storytelling over the usual full-on horror tropes, as we enter this road film with the foursome that are placed into certain scenarios where it asks whether there is a line or is it non-existent when the world figuratively goes to hell. The film starts off promising enough with its first act where we find the group encounter Frank Holloway (Christopher Meloni with an engaging performance) and his daughter Jodie, who is infected with the virus. It’s the uneasy alliance between the group and the Holloway’s that provides the films most engaging moments, as well as one in which the group need gas and once they notice an incoming car has a religious sticker on it, pretend to be Christians in order to sweet talk two women for provisions. The performances from the main ensemble are fine, Chris Pine in particular has the meatier role as hard case Bobby and he gives a memorable performance. There’s some captivating moments of cinematography here by Benoît Debie, particularly during the night sequences.

While the film has an interesting premise and some solid moments, overall it just didn’t engage me as much as I wanted to and I can’t tell whether it was due to not being particularly interested in the characters journey, or that the story was just too predictable and flat, or maybe a bit of both. There’s certain character decisions that feel cliched, and it doesn’t help that the setup of the rules at the start soon become abandoned during particular scenes and only resurrected at the most convenient moment.

While Carriers has some decent moments looking at the darker choices of survival and some decent acting amongst its ensemble, unfortunately overall its pretty much an unengaging and forgettable film.  4/10