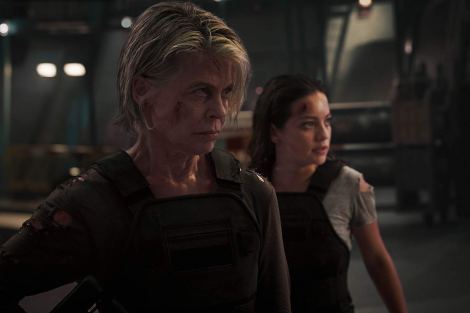 Sarah Connor and a hybrid cyborg human must protect a young girl from a newly modified liquid Terminator from the future. 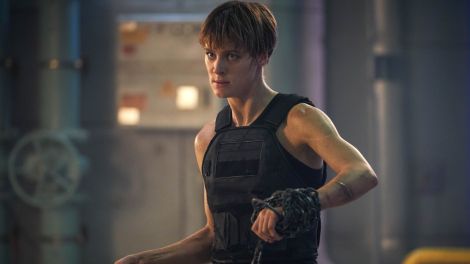 More than two decades have passed since Sarah Connor prevented Judgment Day, changed the future, and re-wrote the fate of the human race. Dani Ramos is living a simple life in Mexico City with her brother and father when a highly advanced and deadly new Terminator, a Rev-9, travels back through time to hunt and kill her. Dani’s survival depends on her joining forces with two warriors: Grace, an enhanced super-soldier from the future, and a battle-hardened Sarah Connor. 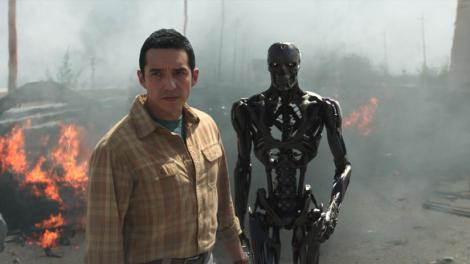 Terminator: Dark Fate marks the return of franchise creator James Cameron to oversee this newly timed sequel/reboot that follows in succession to his first two Terminator films and discards the rest (Rise of the Machines, Salvation and Genysis), with Tim Miller helming. Following on from when the events of T2 saw Judgement Day being prevented, it still hasn’t changed the fate of what’s to come as an enhanced super-soldier from the future, Grace, time travels back to prevent a young woman named Dani Ramos from being killed by a terminator from her time. Along the way from outrunning the terminator, known as a Rev-9, they meet a battle-hardened Sarah Connor.

The Terminator franchise has encountered a love/hate relationship between critics and its fanbase and while some elements can be seen positively from each instalment since T2: Judgement Day, none have come close to matching the acclaim of James Cameron’s films. What had me intrigued about this film, was not only James Cameron returning to the franchise, was that they brought Linda Hamilton back to reprise the role of Sarah Connor. Nearly thirty years on since she was last on the big screen, I’m amazed at how much this franchise missed her absence. We’re reminded in the opening, using old footage from T2, how much she’s been the emotional anchor and heroine to root for in the first two instalments, and that essence hasn’t been captured since. She fits effortlessly back into the character and provides some tough love moments for Dani Ramos, who reminds her instantly of herself and everything she’s had to deal with ever since she was initially hunted by the Terminators. Natalia Reyes is also good here as Dani Ramos, a young girl who goes from looking after her father and brother, to having to deal with the fact that she’s key to the future of mankind in the war against the machines. Mackenzie Davis provides a solid performance as Grace, a super-enhanced soldier sent back from the future to protect Dani and while we get grief glimpses to her backstory and how she came to be what she is, you’re still left wanting more. Gabriel Luna gets to provide some charm along with his menacing demeanour as the terminator here and Arnie returns again to portray the terminator in a interesting new light.

For all the elements that this film had going for it, it unfortunately still feels all to familiar with its fundamental storytelling. It follows the exact same key beats of what came before and that might put some people off it, but what really brought the film down for me was the visuals. There’s a certain scene that features some de-aging tech being used and while Disney has had the cash-flow to finance some seamless de-aging in the recent Marvel Studios films and it’s obvious that they haven’t got that going for them here. There’s also a few dodgy sequences when we see Luna’s Rev-9 in action, but it’s mainly due to his terminator design that the visuals appear off.

Terminator: Dark Fate serves as a closing chapter to James Cameron’s first two films, as well as pass the baton on to a new generation to breathe new life into this tired franchise and while it follows the same beats of the previous instalments. The film works the best out of the rest of the sequels/reboots after T2: Judgement primarily due to being more simplistic in its narrative, having better focus on its characters and, of course, having Linda Hamilton back as Sarah Connor.