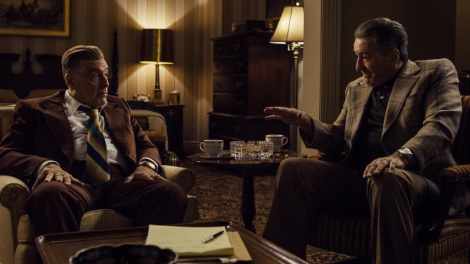 A mob hitman recalls his possible involvement with the slaying of Jimmy Hoffa.

The Irishman is an epic saga of organised crime in post-war America told through the eyes of World War II veteran Frank Sheeran, a hustler and hitman who worked alongside some of the most notorious figures of the 20th century. Spanning decades, the film chronicles one of the greatest unsolved mysteries in American history, the disappearance of legendary union boss Jimmy Hoffa, and offers a monumental journey through the hidden corridors of organised crime: its inner workings, rivalries and connections to mainstream politics. 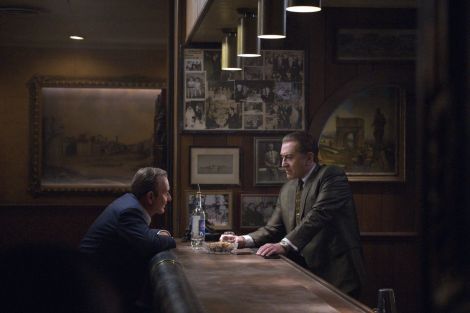 The Irishman marks Martin Scorsese’s return to the crime genre and he’s reunited with previous collaborators behind the scenes as well as in front of the camera. Based on Charles Brandt novel I Heard You Paint Houses and therefore adapted by screenwriter Steve Zaillian, The Irishman focuses on the life of Frank Sheeran, as he recounts his time in Italy during World War II, how he went from truck driver to hitman, becoming involved with the Bufalino crime family and also working for the President of the International Brotherhood of Teamsters, Jimmy Hoffa. The project had been in development hell for the best part of a decade until it began production a few years ago, a lot has been made about the film using de-aging technology, particularly for Robert De Niro as Frank Sheeran, as we jump through various times of his life that span across several decades.

Frank Sheeran narrates his life story to us, the viewer (though we expect that he could inevitably be talking to someone else), along with how his life intertwined with the crime and politics of the 60’s and 70’s, from his association with the Bufalino crime family and Jimmy Hoffa, to the rise of Castro in Cuba, even down to John F. Kennedy’s assassination. Sheeran serves as Scorsese’s Forrest Gump, a passive figure that is involved in pivotal moments in American history. While the film jumps through multiple flashbacks along with returning to Sheeran in the present, it’s structured in such a way that you don’t lose place with what timeline you’re in and that’s down to the solid costume designs from Sandy Powell and Christopher Peterson. For a man that’s in this profession for as long as he has, making a three and a half hour crime epic would feel like a daunting task for any director, but Scorsese makes sure that not a single frame is wasted, returning to a genre his been criticised for glamourising its violence and figures and having an older perspective, telling a story that deals with loss, sin and regret to the point that once the end credits roll, you feel like he pities the subjects here in this story, or anyone that led/leads that life. With so much to unpack within its runtime, Thelma Schoonmaker does an absolutely outstanding job editing this film and making it feel like we’ve breezed through this life told through the decades, then wind it down in the final act where we feel the runtime as we reflect on what was it all worth? The film is filled with some small character moments, as well as comedic, hence having some recognisable names in small roles (e.g Harvey Kietel, Ray Romano, Domenick Lombardozzi, Jesse Plemons and Bobby Cannavale). Robert De Niro gives a great performance as Frank Sheeran, a man that’s at the centre of the action but is mostly content in sitting quiet in the background. Joe Pesci is back from his unofficial retirement after constant encouragement to do so from Scorsese and De Niro and here he portrays far removed from his livewire in previous Scorsese films (Goodfellas and Casino). He’s charming, likeable figure but carries that certain air of menace about him. Al Pacino gets to be the livewire here appearing in his first Scorsese film and just lights up the screen as Jimmy Hoffa. He’s a figure that we can understand where he comes from, hopes to achieve, he’s loud but smart and at times we, the audience, just want to shake him as his mouth and pride make him his own worst enemy. Out of the trio, I’d expect Pacino to get a potential Supporting Actor nomination this awards season.

While a lot was made about the de-aging technology leading up to this film, for me personally after roughly five minutes of witnessing its use on the big screen, it never bothered me and some of it was uncanny in certain scenes, particularly with Robert De Niro and Joe Pesci. The only noticeable issue on that front is not because of the de-aging tech used on their facial expressions, it’s that its used for guys in their mid-to-late 70’s and it’s noticeable in one particular scene when someone is throwing a beatdown outside a grocery store. You can de-age the face but the body stays the same. Also anyone coming in with the mindset of expecting an action-packed crime thriller then you’ve come to the wrong film. A big deal I’ve heard leading up to this film was the lack of dialogue Anna Paquin’s character gets but after seeing the film and context of the storyline, it makes sense for her to have little dialogue as (she portrays the adult version of one of Frank’s daughters) her silence is what pains him the most.

The Irishman sees the return of Martin Scorsese, Robert De Niro, Joe Pesci and Al Pacino return to the crime genre they’re famously known for to bring us a film that’s more melancholy than being a violent thriller. The journey is so entertaining, the variety of characters defined and the dialogue so enthralling, you won’t feel the films lengthy runtime until Scorsese wants you to reminiscence with Frank in the final act of what’s transpired. Arguably not only Scorsese’s best film in years, and not only this years best film, but one of the best films of the decade and I can’t wait to revisit it.