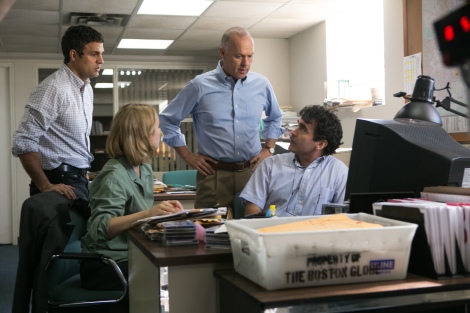 The true story of how the Boston Globe uncovered the massive scandal of child molestation and cover-up within the local Catholic Archdiocese, shaking the entire Catholic Church to its core.

Spotlight focuses on the true story of the Boston Globe’s tenacious ‘Spotlight’ team of reports that delves into allegations of abuse in the Catholic Church, with their year-long investigation uncovering a decades-long cover-up at the highest levels of Boston’s religious, legal and government establishment, touching off a wave of revelations around the world.

Directed by Tom McCarthy, who co-wrote the screenplay with Josh Singer, Spotlight is the true story about the The Boston Globe’s ‘Spotlight’ team, the oldest continuously operating newspaper investigative journalist unit in the United States, specifically on their investigation into the widespread and systemic cases of child sex abuse by numerous Catholic priests in the Boston area. Spotlight is an old-fashion style of filmmaking as does it feel like the journalism it represents compared to present day, hence why some people will compare its pacing with other films like All The President’s Men. It’s nuanced, a lot is said without having to be spelled out into bite sizes for the audience. You’re automatically thrown into how lived in everyone in Boston is from the get go and how the community and the Catholic Church go hand-in-hand, with the introduction of Liev Schreiber’s Marty Baron. The film focuses more on the Spotlight team, but as the new editor of the Boston Globe, he’s an outsider as he’s not from Boston and puzzles his co-workers with believing that following up a recent column of a fellow columnists piece on the Boston archdiocese’s shady handling of various abuse cases, and he feels even more confused as they are when he meets Cardinal Bernard Law, the Archbishop of Boston, particularly when Law assumes that the Boston Globe will work with the Catholic Church. The film not only looks into the investigation of the sexual abuse victims, but asks the question of how this could go unnoticed for such a long period of time? And it harrowing gives you multiple answers to that fact, whilst also showcasing to you just how deeply rooted the issues lay. In one sequence, where there’s a montage of reporters Sacha Pfeiffer and Matt Carroll, going door-to-door to speak to victims and in long shots, speaking outside of houses, there’s always a church spier looming evidently in the background. There’s also the side of the law that’s looked at it, from Billy Crudup’s Eric MacLeish and Stanley Tucci’s Mitchell Garabedianan, attorneys who used to represent (MacLeish) and now (Garabedinan) represent the victims and go against the Catholic Church from a legal standpoint. The ensemble is full of character actors here who give fantastic performances, from Michael Keaton as Walter ‘Robby’ Robinson, to Rachel McAdams as Sacha Pfieffer, to Stanley Tucci as Mitchell Garabedianan. Mark Ruffalo gets the meatier performance of the cast as Michael Rezendes, who over the course of the course of the film goes from patient investigator to dishevelled maniac as they get more of the story and he mentally hits breaking point when he believes they have all the pieces they need and told that they have to hold. It’s great performances all round, but arguably talking about Ruffalo, it’s easily one of his strongest ones this decade. The fact that the film is directed by Tom McCarthy, who played that weasel journalist Scott Templeton in the final season of The Wire, and the fact he’s directed by about journalism is something I find oddly amusing. Truth is he’s crafted a great, important film and whilst it might not have been the fancied option of the Oscar nominees that year by the masses (The Revenant, Mad Max: Fury Road), I’m for one glad that Spotlight won the Oscar that year for Best Picture.

FAVOURITE SCENE: As the Spotlight team are gathered round a desk having a phone conversation with Richard Sipe, where they tell Sipe of their findings of pedophile priests, which he believes to be low with his findings and that there should be six percent of abusive priests in Boston. The way the scene is framed, shot with the dolly amongst Sipe’s reveal and the Spotlight team calculating that the approximate number should be ninety, to which Sipe agrees with, is well crafted and you can tell from the actors expressions that there’s a lot more to uncover than they realised.

DID YOU KNOW: During an interview on National Public Radio’s “Fresh Air”, Director Tom McCarthy said that they built a large set to depict many of the Boston Globe offices, where parts of the story take place. When the reporters depicted in the movie first visited the set, they gravitated to “their” desks, and many of them started to arrange the items on those desks the way they had been at the time.