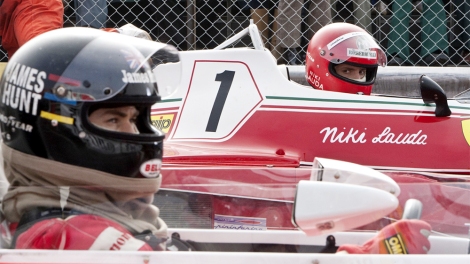 The merciless 1970s rivalry between Formula One rivals James Hunt and Niki Lauda.

Rush is based on a true story that not only focuses on the rivalry between Niki Lauda and James Hunt on the track, it also focuses on their personal lives. While James Hunt has his playboy public persona, Niki Lauda was well known for his methodical, tightly-controlled perfectionism, with both men bound together in the race to win the Formula One World Championship.

Released in 2013, Rush is a racing film based on the Formula 1 rivalry between Niki Lauda and James Hunt, particularly focusing on the 1976 season. Considering that the film opens with Lauda narrating from his point of view, you’d believe we’d get the formula protagonist/antagonist angle, but fortunately (while the film is formulaic) the film shares the screentime between both characters, looking into their personal lives, aspirations, relationships and fears. The details of the true story with added Hollywood glamour placed onto the page from screenwriter Peter Morgan gives the co-leads enough meaty material to showcase their dramatic talents and shine. Chris Hemsworth arguably gives his best dramatic performance as James Hunt, a literal ride-or-die playboy that was known just as much for his antics off the track, bursting with charisma whilst also showing vulnerability lurking underneath the bravado. Daniel Brühl meanwhile is terrific as Niki Lauda, an individual with the stern determination to succeed, whilst also having the sense to fear the risks involved in the sport, particularly in voicing his concerns for an upcoming race that he pays the price for. Whilst their journeys work well as standalone arcs, its their interactions with each other that give the film that extra flair, with the tale going from rivals to mutual respect as the two have their destinies intertwined. While the co-leads take most of the focus through the films duration, some of the supporting cast still get to shine, most notably Alexandra Maria Lara’s performance as Marlene Lauda. With Ron Howard’s steady direction, Anthony Dod Mantle’s cinematography and Mike Hill and Daniel P. Hanley’s editing, Rush shines as a cinematic spectacle with its race sequences, whilst also serving as a compelling drama, it is easy to see why the film has been gaining a following since its release.

FAVOURITE SCENE: While I do enjoy the scene between Niki and Marlene getting a lift but two Lauda fans, I thought the recreation of Niki Lauda’s crash at the Nürburgring to be very effective.

FAVOURITE QUOTE: “The closer you are to death, the more alive you feel. It’s a wonderful way to live. It’s the only way to drive.” – James Hunt

DID YOU KNOW: Daniel Brühl and Chris Hemsworth weren’t allowed to drive a real Formula 1 car so they had to use Formula 3 vehicles with fake F1 bodywork instead.