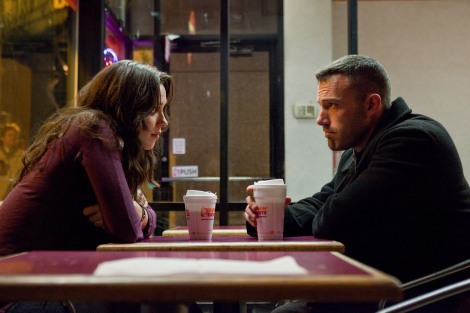 As he plans his next job, a longtime thief tries to balance his feelings for a bank manager connected to one of his earlier heists, as well as the F.B.I. Agent looking to bring him and his crew down.

The Town focuses on Doug MacRay, a longtime thief, try to balance his feelings for bank manager Claire Keesey, whose connected to one of his earlier heists, as his friend Jem Coughlin and florist/crime lord Fergie convince him to do one more job as the F.B.I start to close in on bringing him and his crew down.

Following up from his directorial debut Gone Baby Gone, The Town is a crime drama based on Chuck Hogan’s novel Prince of Thieves. Set in the Boston neighbourhood of Charlestown we focus on a small group of thieves that we see robbing a bank and take the assistant manager, Claire Keesey, hostage. After the heist, Doug MacRay begins to follow her to see what she’s told the police and to make sure that Jem doesn’t eliminate her as a witness when they realise she also lives in Charlestown. As Doug begins to develop a relationship with Claire and the group begin to plan the next heist, FBI Special Agent Adam Frawley begins to close in on who they are as he speeds his pursuit to bring them down. It’s an interesting story, particularly in how the film deals in the dilemmas of the characters and the situation they find themselves wrapped up in due a combination of their upbringing (Doug’s father used to be in that life which led him to prison) and their environment (Charlestown). The trope of the captor falling in love with the captee has been done before, but this is one that I genuinely bought into, and your made to care and hope that they don’t get found out, especially from Doug’s friend Jem. The heist sequences are well executed, from the initial robbery, to the robbery in the middle act and especially the final act that takes place at Fenway Park. While his direction is the films strength, Ben Affleck also gives a solid performance as Doug MacRay, a man whose lost interest in living a life of crime and yearns for a new start as being with Claire opens up them possibilities for him. Rebecca Hall is also really good as Claire Keesey, Jon Hamm is also good as FBI Special Agent Adam Frawley, Blake Lively surprises as Krista Coughlin and Pete Postlethwaite provides that onscreen menace in his limited role as Fergie. The real star of the film however is Jeremy Renner as Jem, who gives a brilliant performance of a loose cannon who has an unconventional method of loyalty and friendship.

FAVOURITE SCENE: When Claire and Doug are sitting outside having coffee, an unexpected appearance from Jem leads to a tense situation of now Jem knowing Doug has been lying to him, while Doug hopes that Claire doesn’t catch a glimpse of Jem’s tattoo behind his neck, the only thing she clearly remembers one of the bank robbers having.

FAVOURITE QUOTE: “I need your help. I can’t tell you what it is, you can never ask me about it later, and we’re gonna hurt some people.

…Whose car are we gonna’ take?” – Doug MacRay and James Coughlin

DID YOU KNOW: Before the movie was released, Ben Affleck praised Jeremy Renner’s performance. He even jokingly stated that if ever there was a bad shot or performance from someone else in a scene, editing could easily cut to Renner looking at a napkin in order to make the scene work. Jeremy Renner later would go on to receive an Academy Award nomination for his performance.