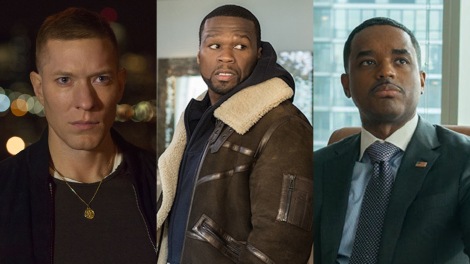 With Power’s final episode airing in the U.S this weekend, TVLine is reporting that Starz have given series orders for three more spinoffs focusing on characters from the original series, Kanan Stark, Tommy Egan and Rashad Tate.

Power is a series that focuses on James ‘Ghost’ St. Patrick, a man trying to escape his role as a drug kingpin for a legitimised life in the elite of NYC.

Life looks set to continue long after Power, with spinoff series Power Book II: Ghost, already in production and will focus on events after the series finale, with a cast that so far includes Michael Rainey Jr., Shane Johnson, Method Man, Mary J. Blige and Naturi Naughton. A trailer was released this morning stating that the series will premiere in the summer.

Power Book III: Raising Kanan, is set to be a prequel series set in the 1990’s that will chronicle the early years of Kanan Stark, originally portrayed by Power executive producer Curtis ’50 Cent’ Jackson.

Power Book IV: Influence, will be focused on Rashad Tate, the slippery politician portrayed by Larenz Tate, as he continues his cutthroat quest for power.

Power Book V: Force, will focus on Tommy Egan, portrayed by Joseph Sikora, as he cuts ties and puts New York in his rearview mirror for good.

Not going to lie, with how this final season has played and drawn out, the only one I’m legitimately interested in is a Tommy Egan spinoff. It feels like they’re reaching with the other spinoff shows focusing on Tariq, prequel Kanan and Rashad Tate, but even a Kanan prequel could be surprisingly interesting.

One response to “Power: Spinoffs Focusing On Tommy Egan, Kanan Stark And Rashad Tate Get Series Orders At Starz”