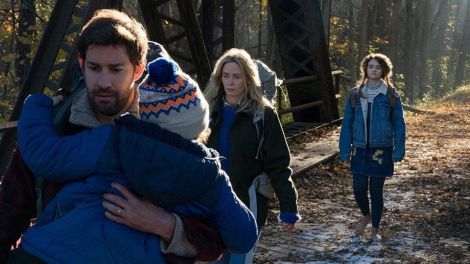 In a post-apocalyptic world, a family is forced to live in silence while hiding from monsters with ultra-sensitive hearing.

In the year 2020, the world has gone into lockdown as blind extraterrestrial creatures arrive on Earth and hunt every living thing in sight as they hunt by sound due to their extremely sensitive hearing. We follow the Abbott family, remaining silent as possible and communicating solely through sign language.

A Quiet Place is a 2018 sci-fi/horror film directed by Jim Halpert from The Office that became a box office hit that year (just under $341m worldwide on a $17m budget), gained critical and audience acclaim and a sequel will be released sometime in the near future (was meant for this week but due to the Coronavirus pandemic, it’s been delayed). We enter a world where these sightless extraterrestrial creatures that have been annihilating anything that makes noise due to their hypersensitive hearing. We follow the Abbott family trying to survive day-to-day, scavenging for supplies in deserted towns and only communicating via sign language. After tragedy strikes the Abbott family, we jump to over a year later where they reside farm house, trying to live and survive in this new, harsh world. The film immediately immerses us into the plight of the Abbott family, scavenging for scraps at an abandoned supermarket, to them losing one of their own, it’s a very impactful opener as we learn of the dread of making any can of noise and the horrific consequences that comes with it with the extraterrestrial creatures coming from nowhere. At their new digs of a farm house however it seems that they have it all worked out, how to live and survive, but the issue now however is that Evelyn is in the final stages of her pregnancy. With the film almost relying heavily on sign language, any sound feels heightened to the point that an oil lantern getting knocked over sounds like a car crash and the sound effects mixers and editors do a terrific job in that department here. The score from Marco Beltrami is also very good here, as it certainly heightens the tension in the second half of the film. The cinematography by Charlotte Bruus Christensen is really good here as well, especially in the sequences shot at night. I still haven’t seen John Krasinski’s other directorial effort (The Hollars), but here I thought his direction was great, I like how certain scenes are slowly played out to great effect, such as the likes of a nail sticking out from the floorboard, to the use of an egg-timer. His performance as the father, Lee Abbott, is also really good, as is Emily Blunt’s as Elevyn, especially in the middle act of the film. Noah Jupe is really good too as Marcus, while Millicent Simmonds, a young deaf actress, is definitely one to look out for as I thought she was terrific here.

FAVOURITE SCENE: It’s no slight from the rest of the film, but that opening scene in which Beau activates the rocket ship as the rest of the Abbott family are halfway across the bridge is arguably still the most effective scene in the film.

DID YOU KNOW: Actress Millicent Simmonds has been deaf since infancy due to a medication overdose. This was the second film she starred in, with Wonderstruck (2017) being her first.