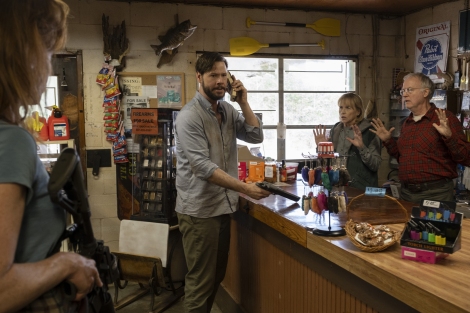 In the shadow of a dark internet conspiracy theory, a group of globalist elites gathers for the very first time at a remote Manor House to hunt humans for sport. But the elites’ master plan is about to be derailed because one of the hunted, Crystal, knows The Hunters’ game better than they do.

The Hunt is the ‘controversial’ film from Universal Pictures that follows twelve strangers who mysteriously wake up in the middle of an area with a crate lying out in the open of a field. They discover that they have seemingly been chosen to be hunted in a game devised by a group of wealthy elites. The hunters’ sport is derailed however one one of the hunted, Crystal, starts fighting back against them.

There was a lot of controversy leading to this films delayed release, such as whether we needed a film like this and, to be fair to Universal and Blumhouse, they played everyone like a fiddle in the second marketing campaign for the film as ‘The most talked-about movie of the year is one that no one’s actually seen’. The films brightest spark comes in the form of Crystal Creasey, one of the ‘deplorables’ that is a lot smarter than she’s given credit for by the hunters and starts taking them out one by one and delivers one of the darkest monologue deliveries about The Tortoise & The Hare I’ve heard. Betty Gilpin, already solidified actress given her performances on Netflix series GLOW, this could be a star-making turn for her in feature roles going forward, as she absolutely captures your attention everytime she’s on screen, her line deliveries are splendid (and at times hilarious) and she’s an absolute badass to boot! Gilpin is absolutely terrific in this. The rest of the cast do well with the limited time that they have and the film at times is funny, particularly in a scene where the hunters break down their selection of deplorables, and how hypocritical they are in their views (as are the deplorables). Out of the action sequences, the final act does live up to the hype (if there was any hype), as its very well choreographed and directed very well by Zobel.

While the film is a satirical thriller, unfortunately the satire is arguably its weakest aspect. While it has not problem in giving jabs at the left and the right but beyond that don’t come in looking for a message that’s not ‘we should stop taking ourselves seriously’. Also despite having some well-known faces and outside of Betty Gilpin’s Crystal, we don’t get time to really know the majority of the characters or even have enough time to care for when they meet their demise, both on side of the hunters and the deplorables, though the deaths here are for more comedic effect than dramatic.

The Hunt works well if you go in to see unlikable people that are hunting people for sport get their comeuppance. While the satirical aspect is the films weakness as while it takes the hand out of republicans and liberals, it’s tamer than what it was build up to be. Still the film is worth watching alone for Betty Gilpin’s performance as she elevates the material and provides a star-making, action-heroine turn.