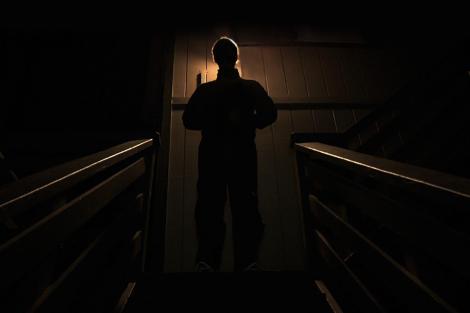 A young videographer answers an online ad for a one-day job in a remote town to record the last messages of a dying man. When he notices the man’s odd behavior, he starts to question his intentions.

Looking for work, Aaron comes across a cryptic online ad: “$1,000 for the day. Filming service. Discretion is appreciated.” Low on cash and full of naiveté, he decides to go for it. He drives to a cabin in a remote mountain town where he meets Josef, his cinematic subject for the day. Josef is sincere and the project seems heartfelt, so Aaron begins to film. But as the day goes on, it becomes clear that Josef is not who he says, and his intentions are not at all pure.

Written and starring Patrick Brice and Mark Duplass, this 2014 found footage horror thriller has us following videographer Aaron, who answers an online job advertisement that leads him to a cabin in a remote mountain town to meet and film Josef. Josef tells Aaron that he’s looking to have him record a series of videos of him talking to his unborn son, Buddy, as he’s suffering from brain cancer and has only a few months left to live. Throughout the day however, Aaron becomes uneasy by Josef’s increasingly odd behaviour.

Creep has an interesting premise that makes good use of going the found footage route as we the audience pick up a number of red flags over certain lines that Josef says to Aaron, as well as facial expressions in moments when he shares a little too-much information as well. The film is made all the more engaging due to Mark Duplass’s performance as Josef, he’s charming-yet-somewhat off initially but as the film progresses you feel that he has sinister intentions, but has a habit of being submissive enough to own his misgivings to Aaron that makes him feel sympathy for him. Patrick Brice (who also directed the film) is good as Aaron, someone whose completely out of their depth in the situation and gets manipulated by Josef’s game. There’s some pretty solid imagery too, particularly in scenes shot in and around the cabin, particularly that of when Josef and Aaron return at night, with Aaron set to go home, and Josef in darkness only lit from behind, it’s a lovely shot in the film that stands out visually.

There are a few issues I had with the film. One of which primarily is that Aaron’s naivety becomes my biggest issue with the film, especially in where the final act leads to as his naivety becomes stupidity, especially after all the things that Josef does to him up to that point. While the film does have a creepy tone throughout, it does lack the tension it sets up  come the halfway point of its eight-seven minute runtime.

While its ending is telegraphed and the film loses the tension it builds from the start in the second half, Creep still a watchable, physiological thriller thanks to Mark Duplass’s performance as Josef.