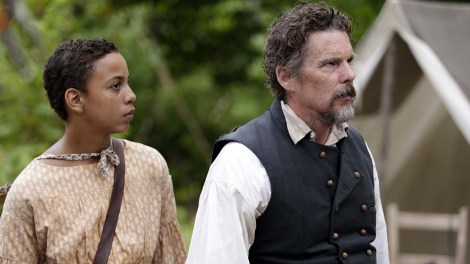 Showtime have released the official trailer for the upcoming drama miniseries The Good Lord Bird.

The official synopsis for the miniseries is as follows:

Based on the James McBride novel of the same name, the series is told from the point of view of Onion, a fictional enslaved boy, who is part of John Brown’s motley crew of abolitionist soldiers during the time of Bleeding Kansas, eventually participating in the famous 1859 raid on the Army depot at Harpers Ferry, West Virginia. Brown’s raid failed to initiate the slave revolt he intended, but was the instigating event that started the American Civil War.

I was already sold on the miniseries as not only was Ethan Hawke starring in it, but he’s created this television adaptation and executive producing it. But from what I’ve seen from this trailer, from the way the shots are captured, to Ethan Hawke seemingly being locked into 100% intensity as John Brown, I’m definitely looking forward to this even more now.

The Good Lord Bird is set to premiere on Showtime on the 9th August 2020, with no UK/Ireland release as of yet.