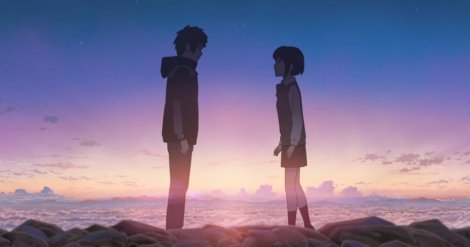 Two strangers find themselves linked in a bizarre way. When a connection forms, will distance be the only thing to keep them apart?

Released back in 2016, Your Name. is the Japanese animated feature from Makoto Shinkai that would become the highest grossing anime film worldwide to date. The film focuses on Mitsuha Miyamizu and Taki Tachibana, two kids from High School that are complete strangers living separate lives until one day, they suddenly switch bodies. With the bizarre occurrence continuing to happen randomly, the pair begin to adjust their lives around each other and build a connection and communicate by leaving notes and messages. When a comet comes near to passing over the Earth, something shifts and the body swapping stops, leading to Taki trying to seek out Mitsuha, leading to stunning revelations that might force them to be forever separated.

I came late to the party in regards to watching Your Name, which I finally done towards the end of 2019 and I’m glad I did as I thought the film was excellent. The animation style of Your Name is absolutely gorgeous to look at, whether it’s the never-ending horizon from the mountains of Itomori, to the Toyko skyscrapers touching the sky, there’s an incredible amount of attention to detail in the artistry of the film that you’ll be capturing any moment from the film to use as wallpaper or blow up onto a canvas. The film lures the audience in with the first act giving us a ‘Freaky Friday’-esque concept, as we have the city boy experiencing the countryside and the country girl experiencing the big city life, it does make you initially question what the mass appeal of the film is all about…until Taki arrives at Mitsuha’s mountainy town of Itomori to find her and this is where the film really steps it up a level from there onwards and has you glued to the screen for the rest of the films runtime. The film has a fantastical premise and manages to avoid the cliches that comes with it, grounding its reality with the simplicity of how Taki and Mitsuha try to become supportive of each other and attempt to better one another’s life in some way, making you care what about the journey and the destination that the film is leading you towards, making the final scene all the more rewarding. It’s a wonderfully directed film by Makoto Shinkai, complimented by a beautiful score by Radwimps, and lovely voice acting performances by Ryunosuke Kamiki and Mone Kamishiraishi (Michael Sinterniklaas and Stephanie Sheh if you watch the English dub).

FAVOURITE SCENE: When Taki and Mitsuha finally meet and decide to wake their names on each others hand before they forget. The moment that pen drops when Mitsuha starts to write her name onto Taki’s hand and the musical score cuts off is a stab in the heart.

FAVOURITE QUOTE: “Treasure the experience. Dreams fade away after you wake up.” – Hitoha Miyamizu

DID YOU KNOW: This is the first anime film not made by Studio Ghibli or Hayao Miyazaki to gross ten billion Yen at the Japanese box office (about US$98 million).