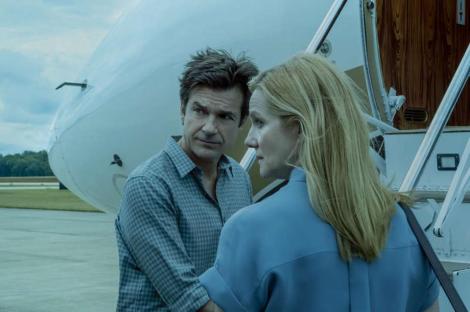 Media outlets are reporting that Netflix have renewed drama series Ozark for a fourth and final season, which will consist of fourteen episodes and be split into two seven-episode parts.

The series focuses on Marty Byrde, a financial advisor-turned-money launderer for a Mexican drug cartel, who moves his family to the Lake of the Ozarks to make good for the cartel. The synopsis for the third season is as follows:

It’s six months later, the casino is up and running, but Marty and Wendy are fighting for control of the family’s destiny. Marty preaches keeping the status quo.  Aided by an alliance with Helen and drug cartel leader Omar Navarro, Wendy plots for expansion. But when Wendy’s brother Ben comes into town, everyone’s lives are thrown into chaos.

A super-sized season means super-sized problems for the Byrdes. I’m excited to end with a bang(s).

We’re so happy Netflix recognised the importance of giving Ozark more time to end the Byrdes’ saga right. It’s been such a great adventure for all of us — both on screen and off — so we’re thrilled to get the chance to bring it home in the most fulfilling way possible.

Ozark is a gripping drama that has captivated audiences all around the world and garnered tremendous critical acclaim. We’re so grateful to Chris, Jason, Laura, Julia and the entire cast and crew for all their tireless dedication to the show and can’t wait to see how the Byrdes’ journey comes to a close.