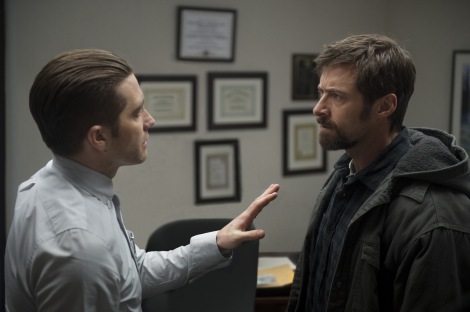 When Keller Dover’s daughter and her friend go missing, he takes matters into his own hands as the police pursue multiple leads and the pressure mounts.

The Dover’s and the Birch’s live in a typical neighbourhood in Pennsylvania. The two families gather for Thanksgiving and their two girls, the Dover’s daughter Anna, and the Birch’s daughter Joy, leave to go to the Dover’s household to get her whistle. When the children don’t come back, the families go looking for them around the place, with the Dover’s son revealing that there was an RV outside one of the houses close to where they live that is now gone. Detective Loki finds the RV with a group of police officers and with a young man named Alex Jones, trying and failing to get away in it. Once Alex is released with no evidence to keep him in custody, Keller decides to take matters into his  own hands in finding out where the girls are before it’s too late.

After entering the new decade with Incendies, Denis Villeneuve would then follow that feature up with the drama Prisoners in 2013. The film focuses initially on Keller Dover, an independent contractor who lives in a nice, quiet, suburban neighbourhood with his wife Grace, and his two children Ralph and Anna. The Dover’s spend Thanksgiving in the company with the Birch family, Franklin and Nancy, as well as their daughters Eliza and Joy. While the parents converse in the living room, the two little girls ask if they go for a walk…only to not return, and panic ensues when they learn that a creepy RV was seen in the area earlier but has vanished. When Detective Loki locates the RV and arrests the driver Alex Jones. From the moment he appears on-screen, Alex Jones appears odd, with his mumbling high-toned voice, almost of a kid yet to enter his teenage years. When Keller is angered by the police’s decision to release him due to lack of evidence, he manages to bombard through the journalists to ask him what he down to them, with Alex’s only response being, “They didn’t cry until I left them.” From the moment Keller is the only one to hear this and then his wife falls into a pit of despair, he decides to take matters into his own hands and becomes a force of nature as he kidnaps and tortures Alex in order to find the girls before time runs out. With the screenplay written by Aaron Guzikowski, the film balances the fine line of the moral compass of asking the audience ‘What would you do?’ if you were in the position of the parents here, as in would you go to whatever lengths in order to find your missing child, as well as presenting how having a tremendous amount of certainty can override doubt and how that is an important ingredient to have in your moral fibre. We learn about Keller Dover as a character through the course of the film as he’s going through this tremendously traumitising moment of his life. The opening shows him out hunting with his son, then on the car ride back, telling him how it’s better to prepare for the worst, whatever that may be. When Detective Loki is called to the Dover’s house by Grace, we see how prepared Keller is as the basement is completely stocked, almost fit for an impending storm, war or zombie apocalypse. His favourite song is the’The Star-Spangled Banner’. Keller Dover is a middle-class American that has done everything, in his mind at least, to be the provider and protector for his family and once his daughter is missing just by walking outside their street, that blanket of comfort is gone and what follows is a simmering rage that Keller tries to convey with a calm, vocal demeanour but facially, he’s looking for any excuse to unleash his version of righteous fury, which is completely focused on Alex Jones and is to blind about it being anybody else that kidnapped the kids. On the other side of the story is Detective Loki, who we know little-to-nothing about his personal business. We know from his introductory scene that he’s a loner cop, eating alone for Thanksgiving in a Chinese restaurant, learn that he grew up in a boys’ home, raised in foster care, has a few distinct tattoos and a facial tic that oddly engages you to focus on his interactions and reactions to what people say or do. These roles are played terrifically by Hugh Jackman and Jake Gyllenhaal, with Jackman playing Keller like a wounded animal, while Gyllenhaal plays Loki with a fine balance of calm and frustration as the missing kids case goes on and on and he starts discovering a connection to the girls as he visits local pedophiles in the area. The performances from Terrence Howard and Viola Davis is also really good here as Franklin and Nancy Birch, who learn and sometimes participate in what Keller is going to Alex, amongst begrudgingly so, but it’s their fear of being wrong against Keller’s certainty over the fate of their daughters life is a conflict that’s well captured by the duo. Paul Dano is also terrific as the childish yet creepy Alex Jones. What makes the film work tremendously well however is my favourite collaborative trio of the last decade: director Denis Villeneuve, cinematographer Roger Deakins, and composer Jóhann Jóhannsson.

FAVOURITE SCENE: Keller Dover and Franklin Birch are interrogating/torturing Alex Jones in an abandoned apartment building and Keller is starting to cross over the line when it looks like he’s about to hammer away at Alex’s hand but instead hammers half the sink off before putting it through the wall instead of Alex’s head. Even as Wolverine, Hugh Jackman hasn’t bee as frightening as he is here.

FAVOURITE QUOTE: “You know the most important thing your granddad ever taught me? Hmm? Be ready. Hurricane, flood, whatever it ends up being. No more food gets delivered to the grocery store, gas stations dry up. People just turn on each other, and uh, all of a sudden all that stands between you and being dead is you.” – Keller Dover

DID YOU KNOW: Detective Loki’s tattoos, Freemason ring and facial tics were all Jake Gyllenhaal’s ideas.