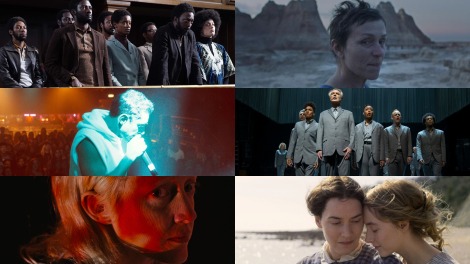 BFI previously announced that the film festival would open with the European premiere screening of Steve McQueen’s Mangrove, and that the festival would close with the UK premiere of Francis Lee’s Ammonite. Now it’s been announced that the festival will be delivered virtually and via cinematic screenings as over the course of twelve days (7th-18th October), there will be over fifty virtual premieres and a selection of highly anticipated new feature film previews at BFI Southbank as well as venues across the UK that include other cinemas in London (Barbican Centre, Curzon Soho, Ciné Lumière, ICA and Prince Charles Cinema), Bristol (Watershed), Sheffield (Showroom Cinema), Belfast (Queen’s Film Theatre), Manchester (HOME Manchester), Glasgow (Glasgow Film Theatre), Cardiff (Chapter) and Nottingham (Broadway Cinema).

There’s a wide-range of variety in the line-up at this year, as the festival showcases work from more than forty countries, with the programme including fiction, documentary, animation, artists’ moving image, short film, restored classics from the world’s archives as well as previous of several episodic/series-based works made for the small screen. Every screening will be presented with either an intro and/or Q&A from filmmakers and programmers. The festival also includes many ways of which audiences can engage for free, with the LFF opening screenings of Mangrove in cinemas across the UK, selected feature films will be available on the BFI Player, as well as an international programme of short films featuring established and breakthrough film talents will also be available for free on the BFI Player. Also available for audiences for free will be Screen Talks with major filmmakers and actors, as well as online salons and Q&A’s across the festivals run for audiences to get more depth and understand of the talking points and themes emerging from the programme.

The recently announced LFF Expanded strand of XR and immersive art will also be free to access both virtually and at the BFI Southbank for the duration of the festival. All films are geo-blocked to the UK while all the festival talks and LFF Expanded are available to experience for free from anywhere in the world.

Also, with the way the 64th BFI London Film Festival is being presented virtually and physical screening presence, the festival awards will be in the hands of the audience, taking the position of the festival’s official jury in which viewers engaging with the festival online will be invited to vote on Virtual LFF Audience Awards in four categories: Best Fiction Feature, Best Documentary Feature, Best Short Film and Best XR. The winners will be announced in a live online ceremony on the final weekend of the festival.

Here is the full list of features screening in the 64th BFI London Film Festival (V = Virtual Premiere / C = Cinemas across the UK).

If It Were Love (Director: Patric Chiha | V)

One Man And His Shoes (Director: Yemi Bamiro | V)

The Painter And The Thief (Director: Benjamin Ree | V)

The Salt In Our Waters (Director: Rezwan Shahriar Sumit | V)

Irish Cinephile will be covering the BFI London Film Festival 2020.