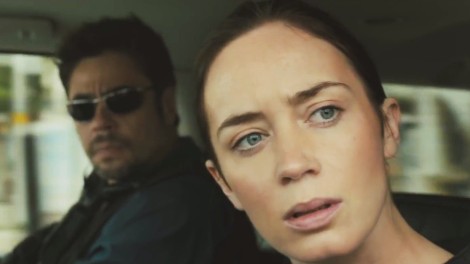 An idealistic FBI agent is enlisted by a government task force to aid in the escalating war against drugs at the border area between the U.S. and Mexico.

Sicario focuses the ongoing drug crisis in the border region of USA and Mexico in which we land straight in the beginning of a raid of a suspected cartel safe house in Chandler, Arizona, led by FBI Special Weapons and Tactics Team Agent Kate Macer. As the team are successful and learn what is in the safe house, they trigger a bobby trap that results in a few deaths and injuries. In the aftermath Kate Macer meets Matt Graver, a Department of Defense adviser who is leading a team of elite agents who are searching for the men responsible for the corpses and the IED, one of them being cartel boss Manuel Diaz, in which the only way to join is if Kate volunteers…which she does, eager to make a difference. Kate joins up with Matt Graver and meets his partner, Alejandro Gillick and soon discovers that she’s en route to Juarez, Mexico and soon idealistic Kate begins to question the methods on tackling those responsible.

Written by Taylor Sheridan and directed by Denis Villeneuve, Sicario tackles the subject of the drug trade in an era where the ‘war on drugs’ message has long been lost and we’re now in the murky world of not trying to stop it, but maintain a certain sense of order. We follow FBI agent Kate Macer, alongside her partner Reggie Wayne, leading a raid on a suspected Sonora Cartel safe house, only to discover dozens of corpses within the walls of the house and a bobby trap that kills a few, injures several. In the aftermath of the raid, Kate’s boss recommends her to join a task force led by CIA officer Matt Graver, with the aim of apprehending Sonora Cartel lieutenant Manuel Díaz. Believing that the task force will bring those responsible for the incident at the safe house to justice, Kate Macer joins, eagerly hoping to make a difference. What follows over the course of the films two-hour runtime is one of the most intense cinematic experiences I had of the last decade. Villeneuve’s direction here is tremendous, particularly in how he builds the tension in certain moments to heighten the sense of anything can happen at any moment, from the opening of the house raid to the squad trying to extract a prisoner across the border which results in a slow-build shootout that builds and builds. These moments are complimented perfectly by Roger Deakins’ cinematography, from the scope of the arrival in Juarez, to the night vision tunnel raid. As for Jóhann Jóhannson’s score, I absolutely loved how it cranked up the tension and menace of what unfolded on screen, particularly the use of the track ‘The Beast’. Emily Blunt gives a terrific performance as Kate Macer, conveying confidence in her ability as a government agent who is kept in the dark as much as the audience is as to what Matt Graver’s objective is and is just as bewildered as we are as to what boundaries, if any, exist in the line of duty in this ‘war’. She also brings a certain vulnerability that makes the audience care and root for Kate, particularly as the objective is revealed and her honourable compass is pushed to its limits. Josh Brolin gives a great performance as Matt Graver, a CIA officer whose mission statement is to work outside the rules of engagement, holding back most the cards when it comes to the objective, telling Kate to watch and learn…yet he won’t show and tell. However, the highlight for me was Benicio Del Toro’s commanding performance as Alejandro, a calm, mysterious figure that Kate and the audience is trying to read and it’s that air of mystery and the way Benicio portrays the character that makes him so interesting and once we learn exactly who he is, he’s absolutely terrifying to watch.

FAVOURITE SCENE: Alejandro makes it to Alarcón’s estate and comes face-to-face with the man responsible for his family’s death, as he seats to have dinner with his own family. I still remember the multiple gasps at the cinema reacting to how this scene played out.

FAVOURITE QUOTE: “Nothing will make sense to your American ears, and you will doubt everything that we do, but in the end you will understand.” – Alejandro Gillick

DID YOU KNOW: While Benicio Del Toro’s character is frequently silent in the movie, he initially had more lines. “In the original script, the character explained his background several times to Kate,” Del Toro said. “And that gave me information about who this guy was, but it felt a little stiff to have someone you just met fifteen minutes ago suddenly telling you what happened to him and who he is.” Working with director Denis Villeneuve, Del Toro began cutting some of his dialogue to preserve the mystery of who his character is; Villeneuve estimated they cut 90% of what Del Toro was originally intended to say by screenwriter Taylor Sheridan. Like Del Toro, Villeneuve saw power in stripping the character down to a brooding silence, stating that dialogue belongs to plays and “movies are about movement, character, and presence, and Benicio had all that.”