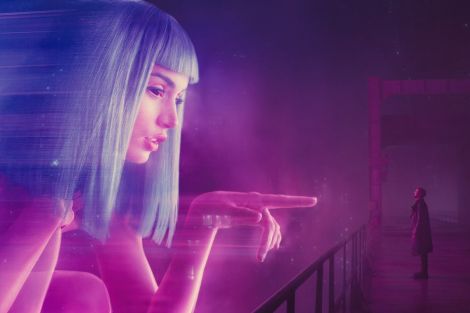 A young blade runner’s discovery of a long-buried secret leads him to track down former blade runner Rick Deckard, who’s been missing for thirty years.

Thirty years after the events of Blade Runner, a new Blade Runner, L.A.P.D. Officer K, unearths a long-buried secret that has the potential to plunge what’s left of society into chaos. K’s discovery leads him on a quest to find Rick Deckard, a former L.A.P.D. Blade Runner, who has been missing for thirty years.

Blade Runner 2049 is the sequel to Ridley Scott’s 1982 sci-fi film, with Denis Villeneuve helming the sequel. Set thirty years after the events of the original, we follow K, a replicant who works for the Los Angeles Police Department as a ‘blade runner’, who hunts and ‘retires’ old replicants. When he retires one replicant at a farm, he discovers a box buried under a tree. Contained in the box is the remains of a female replicant with a shocking truth…that the replicant died during a caesarean section, revealing that replicants can reproduce biologically, something that was previously thought to be impossible. With his superior fearing that if this revelation were to become public knowledge and lead to a war between humans and replicants, she orders K to find and retire the replicant child to cover the truth, which leads up on a quest to find former blade runner Rick Deckard, who has been missing for thirty years. Initially I was skeptical on a sequel to Ridley Scott’s original film, especially in this decade there was a lot of returning film properties with lengthy gaps between the original and its sequel/continuation and while some were a nice, welcome return, most of the them…just didn’t live up to the standards set by their predecessor. Clearly from the films opening sequences, Denis Villeneuve indicates that he’s not here to rely on bringing us some familiar, nostalgic fan service (like a number of reboots/delayed-sequels have in the past decade), instead he looks to expand on the topics that were raised in Scott’s original, looking at what it means to be human…spiritually, not literally, as well as explore the power of memory. Putting the focus on a new character also benefits the film greatly as we follow the journey of another Blade Runner in K, an agent that there’s no ambiguity here (like Deckard in the original) that he is infact a replicant hunting down his own kind. As the film initially sets out as a detective story, it soon becomes more personal for K as his memory implants may be real as his journey progresses in the search to find the child and Deckard and it is one of the most engrossing character arcs to watch as his clam demeanour slowly peels away till it eventually unleashes in a small outburst that is one of the most effective scenes in the film. There’s also a relationship sub-plot between K and Joi, a holographic artificial intelligence and the two have such a strong bond despite their lack of physical connection, though that is touched upon in an interesting scene involving Mackenzie Davis’s Mariette as she syncs with Joi to serve as a ‘vessel’, as it were, for the two to make love, making it very familiar of a scene in Spike Jonze’s Her. It’s these character moments, as well the world building of the future and how bleak it is on a humanity aspect, particularly when it showcases what becomes of women, orphans and replicants in this future. The film is confidently directed by Denis Villeneuve, particularly in how he showcases the scale of Los Angeles and the surrounding areas in 2049 (such as the outskirts of California and Las Vegas), and his collaboration with Roger Deakins is a perfect combination here, with Deakins providing such striking imagery that it finally earned him his first Academy Award win. The visual effects are fantastic, the art direction and production design are also terrific and as for the score by Benjamin Wallfisch and Hans Zimmer, it is entrancing. As for the performances, Ryan Gosling arguably gives one of his best as agent K, whose fear and confusion is conveyed at times through his calm demeanour,  and he’s aways had this ability to portray such vulnerability whilst mostly keeping his emotions in check. Ana de Armas is really good with her performance as Joi, particularly as it could’ve been left as a thankless role, but it’s given such depth and it feels earned with multiple viewings. Harrison Ford arguably gives his best performance in his revisited roles that includes Han Solo and Indiana Jones. I also really like Sylvia Hoeks performance as Luv, Wallace’s replicant enforcer that is also on the hunt to find the replicant child as Wallace hopes to discover the secret to replicant reproduction that could help them expand further into interstellar colonisation.

FAVOURITE SCENE: Niander Wallace introduces himself to Deckard and, in an effort to entice him to give the location of Freysa in order to locate the replicant child, he brings out Rachael, an exact copy of the one from the original. The visual effects of this scene and how it plays out is what makes it stand out to me as my favourite scene in the film.

FAVOURITE QUOTE: “Our lives mean nothing next to a storm that’s coming. Dying for the right cause. It’s the most human thing we can do.” – Freysa

DID YOU KNOW: David Bowie was Denis Villeneuve’s first choice for the role of Niander Wallace, but he died before the start of shooting.