Four friends, all high school teachers, test a theory that they will improve their lives by maintaining a constant level of alcohol in their blood.

There is an obscure philosophical theory that humans should have been born with a small amount of alcohol in our blood; that modest inebriation opens our minds to the world around us, diminishing problems and increasing creativity. Four friends, who are high school teachers, decide to test this theory by maintaining a constant level of alcohol in their blood during work to see the results. 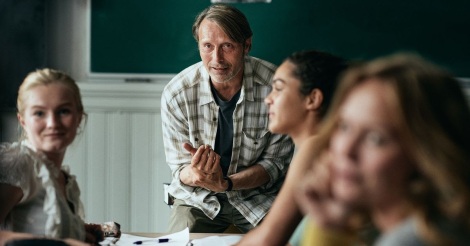 Another Round, also known as Druk, sees director Thomas Vinterberg and actors Mads Mikkelsen and Thomas Bo Larsen reunite after previously working together in 2012’s Danish drama The Hunt aka Jagten. The film focuses on four friends and high school teachers Martin, Tommy, Peter and Nikolaj, with one of them bringing to their attention that Norwegian psychiatrist Finn Skårderud claimed that humans had an alcohol deficit of 0.05% in their bodies, and if that 0.05% was consumed, humans would be more productive and generally happier. As the four test the theory, they discover improvements in themselves and each other almost immediately, pushing their limits with the theory leads to drastic changes and consequences.

Within the screenplay written by Thomas Vinterberg and Tobias Lindholm (another reunion as he also co-wrote the screenplay for The Hunt), Another Round explores the theme of alcoholism told through the lens of a group of men going through a mid-life crisis. The main focus on that narrative is Martin, a history teacher who is struggling to engage with his students in a matter which they embrace the subject and learn from it, whilst at home with his family he appears just as dejected as he does in the classroom. It’s at a 40th birthday dinner however with philosophy teacher Nikolaj, football youth coach Tommy, and music instructor Peter, that Martin begins to question where he is currently with his life. So when Nikolaj tells them about psychiatrist Finn Skårderud’s philosophy, Martin is the first to put that theory to the test before he starts teaching and when they notice the sudden positive vibes from him at work, they all decide to join in. Vinterberg’s and Lindholm’s script touches upon how drinking is a social norm and how it’s often labelled by some as a necessity, with Martin teaching his students about Winston Churchill, mentioning him being a heavy drinker, whilst the men also base their test on what time Ernest Hemingway started drinking and finished at, as well as mention Pyotr Ilyich Tchaikovsky, arguing how their alcoholism played a part in their genius and legacy.

Certain filmmakers could take this material and tackle it in a way that it would come across as too preachy or melodramatic in its portrayal of alcoholism, but here Vinterberg takes a non-judgemental approach in handling the characters and their respective alcohol-fuelled journeys, never condemning them but highlighting the lows that come with an excessive amount of alcohol consumption, as their antics are comedic at first, but as they progress and push their limits further, there’s disastrous consequences that lead each man to a point where it’s time to call the experiment off or there’s no end at the bottom of a bottle. We see each character with their own personalities before the beginning of the experiment and we see how they’re all effected differently and that leads to some humorous scenes, such as any scene involving Tommy coaching the kids football team and how he interacts with one young kid in particular he just calls specs. There’s another scene in which the men are drinking away until they have to go out to the shop to buy some fish because their spouse asked them to, leading to another humorous scene. While Tommy, Nikolaj and Peter have their own arcs here, the main focus is on Martin’s journey and also focuses on his marriage with his wife Trine, which appears to rejuvenate once Martin begins the experiment, though it soon becomes apparent that there may be too much decay in the relationship to mend it.

Mads Mikkelsen gives a fantastic performance as Martin, one of my favourite performances from an actor this year, conveying the right balance of humour with sadness of a man that we meet in the midst of his mid-life crisis, who goes through a few physical looks throughout the experiment and in the end looks to be in a worse place than when he started, but there’s a glimmer of hope on the horizon to keep him going. The supporting ensemble are terrific as well, Thomas Bo Larsen in particular is excellent as Martin’s best friend Tommy, and the chemistry amongst the four gentlemen (including Lars Ranthe and Magnus Millang) is terrific to watch. The direction once again from Vinterberg is terrific, as is the cinematography by Sturla Brandth Grøvlen. It’s worth noting that the film ends with a particular trope that I usually hate, but my god did they not build it up throughout the film and they went and bloody nailed it, making it one of my favourite endings at least this year.

Another Round is another successful collaboration from Thomas Vinterbeg and Mads Mikkelsen, with the former crafting an engaging and thoughtful insight into alcoholism, friendship and love, and the latter giving a terrific performance. One of my favourite films of the year with a memorable conclusion.