A troupe of self-obsessed theatre stars swarm into a small conservative Indiana town in support of a high school girl who wants to take her girlfriend to the prom. 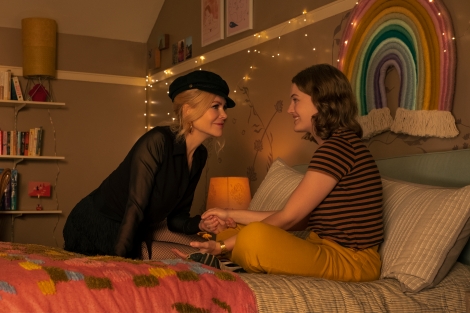 The Prom focuses on Dee Dee Allen and Barry Glickman, two New York City stage stars with a crisis on their hands: Their expensive new Broadway show is a major flop that has suddenly flatlined their careers. Meanwhile, in small-town Indiana, High School student Emma Nolan is experiencing a very different kind of heartbreak: despite the support of the High School Principal, the head of the PTA has banned her from attending prom with her girlfriend. When Dee Dee and Barry learn about the story and decide this is the perfect cause to help resurrect their public images, they hit the road to Indiana with Angie and Trent, another pair of cynical actors looking for a professional lift. But when their self-absorbed celebrity activism unexpectedly backfires, the foursome find their own lives upended as they rally to give Emma a night were she can truly celebrate who she is. 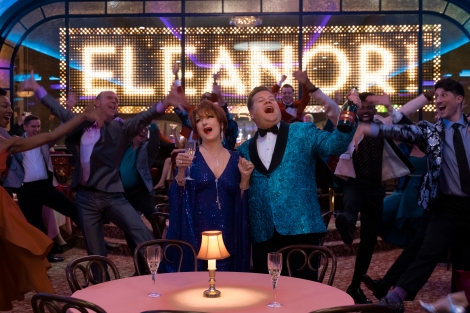 The Prom is a film adaptation of Broadway musical of the same name by Chad Beguelin, Bob Martin and Matthew Sklar, with Beguelin and Martin adapting the screenplay, and directed by veteran television writer, producer, and director Ryan Murphy, his first directorial big screen feature since Eat Pray Love a decade ago. Opening in small-town Indiana, we learn that the PTA have banned one of the students, Emma Nolan, from attending the upcoming High School prom with her girlfriend. Meanwhile in New York, a group of Broadway stage actors are having a career crisis and when they learn about Emma’s story, they see this as an opportunity to boost their profile and public image, and head to Indiana to rally a protest for her which spectacularly backfires.

Having not seen the musical prior to this film adaptation, I wasn’t overly sure what to expect other than what was promoted in the trailers leading up to its release, big spectacle of musical numbers and a bright colour scheme…and the film certainly delivered on that front as the production design by Jamie Walker McCall and art design by Sarah Delucchi, Tom Frohling and Adam Rowe stands out, as well as the costume design work by Lou Eyrich and set decoration by Gene Serdena. There’s a lot of work that goes into the dance choreography as well, with loads of dance extras in front and behind the stars doing the musical numbers and, for the most part, that’s well captured by Ryan Murphy’s direction. In terms of performances, the ensemble seemingly appear to be having a blast here, particularly Meryl Streep as Dee Dee Allen, one of the egotistical Broadway actors with a memorable music number in ‘It’s Not About Me’. She’s mostly paired alongside Keegan Michael-Key as Tom Hawkins, the principal of the High School, Broadway and Dee Dee Allen fan. I thought Keegan Michael-Key was really good here as Tom Hawkins, their chemistry and arc throughout the film was one of the more impressive and grounded parts of the film, and I especially liked Key’s musical number that’s an ode to Broadway in general, ‘We Look To You’. While Andrew Rannells’ character Trent Oliver, doesn’t get as much screentime as others, I thought he gave a decent performance, and his musical number ‘Love Thy Neighbor’ happened to be one of the highlights of the film. Another I thought was underused but gave a good performance was Nicole Kidman, her character Angie has a touching scene with Emma that makes you wish that she has more to do here. As for the actors at the heart of the story, Jo Ellen Pellman and Ariana DeBose, I thought they were good in their roles as Emma Nolan and Alyssa Greene respectfully, particularly in showcasing the struggles of being in a hidden relationship where one is openly gay and the other is hiding her true self due to her conservative parent.

For me personally, the film began to lose its sparkle around the halfway mark of the films two-hour and ten minute runtime and I certainly felt its length when we reached the final scene as it landed with a whimper rather than swagger. As for the screenplay, I do feel like it was heavy-padded in how it handled certain storylines and the resolutions to them in the end, particularly between Alyssa Greene and her mother, and especially not just what the fellow students do, but the entire community does to Emma, that don’t feel earned and more just for having the film conclude a positive note.  While the film winks and acknowledges the plot of these prestigious, famous individuals coming down to Indiana to literally steal the spotlight from Emma that, in turn, by the films end it does feel like the more prestigious names in the cast do take some shine off Jo Ellen Pellman through no fault of their own. Like any musical film, there’s some songs that work really well and some that don’t quite work as well, and The Prom is no exception here as a few of the musical numbers just didn’t work for me, examples of which being the number where a few of Emma’s fellow students are asking each other out to prom and another being ‘Zazz’ between Angie and Emma, though that’s nit-picking on the choreography and staging for it on my part, and ‘Barry’s Going To Prom’ on paper should work, in execution it sadly did not. In terms of performances, there were a few that didn’t work for me. A lot has already been said about James Corden online in regards to his performance as Barry Glickman, particularly in regards to having a gay character portrayed by a straight man and, even though this in my view his best performance since his turn as Steve in Begin Again, he does unfortunately feel miscast here as Barry, particularly with the dramatically emotional story arc that’s going on with his character over the course of the film. While the sets and costumes shine here, I felt that the cinematography didn’t really get to stand out here, particularly as a few sequences have the light dimmed to a point of making it feel like staged that it took me out of the film.

The Prom is bright, joyfully colourful, has some well staged musical numbers and standout performances by Meryl Streep and Keegan Michael-Key. Unfortunately it did lose its zazz for me towards the end and lacked the emotional punch I was hoping for with the material.