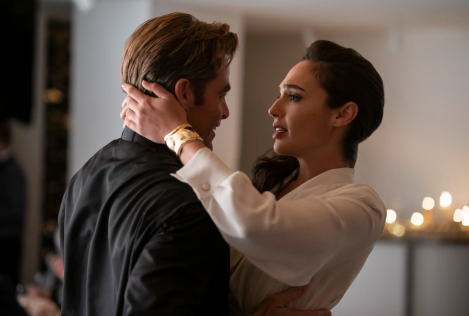 It’s been over a week since its international release in territories that still allow for cinematic releases and with it becoming available to those in the US at available cinemas as well as on the streaming service HBO Max since Christmas Day, there has been a lot of discussion online about Wonder Woman 1984, with one sub-plot in particular being highly discussed….the return of Steve Trevor. So of course for the rest of the article going forward, there will be spoilers ahead about Wonder Woman 1984.

When Wonder Woman came out in the summer of 2017, one of the highlights of the film was the love story between Diana and World War I pilot and spy Steve Trevor, as well as the onscreen chemistry between Gal Gadot and Chris Pine. Even though Steve Trevor heroically sacrifices himself in the final act of the film, in comic book lore no one every really dies so when it was announced that Chris Pine would be returning for the sequel, it wasn’t really a surprise but left fans curious as to how he would appear in the film. Would it be Steve Trevor plucked out of the Word War I timeline into the future? Would it be Steve Trevor resurrected from the dead due to magic? Would Chris Pine actually be playing a descendant of Steve Trevor? Well, it turned out that number two was the correct option here.

After Wonder Woman foils an attempted robbery of antiquities at a store in a mall, the items arrive at the Smithsonian Institution as the FBI look for Barbara Minerva to identify the stolen antiquities from the robbery. This leads to Barbara and Diana coming across a particular antique, inscribed in Latin that we later discover is the Dreamstone which has the power to grant wishes to anyone that comes into contact with it. So, naturally, Diana has a hold of the Dreamstone and unknowingly wishes Steve Trevor back to life. Unfortunately, once it’s revealed that Steve Trevor is back from the dead, he also happens to have Quantum Leap’ed into another man’s body. It begins with Diana being approached by this random stranger (played by Kristoffer Polaha), who repeats Steve Trevor’s final words to Diana from the original film and eventually Diana sees the stranger in the form of Chris Pine’s Steve Trevor, goes back to the strange guys place and in a moment of Quantum Leap-esque influence with Steve looking at the guy’s reflection in the mirror, Diana tells him that “all I see is you”, before the sequence ends and the next time that we see them, it’s implied that they slept together. I’ve mentioned Quantum Leap a few times and while we’ve seen this idea before of someone being in another body, why is this sub-plot in Wonder Woman 1984 in particular causing such a discussion? Is it because it’s a tired trope? Are viewers that have issues with it being too ‘woke’? Or is it because the sub-plot is actually problematic, particularly as the two know that Steve is using someone else’s body but they sleep together anyways?

The sub-plot will lead viewers down the rabbit hole of having reasonable questions about this stranger. Diana spends a few days taking Steve Trevor on a tour of Washington, as well as hijack a jet plane to head towards Cairo and back, you begin to wonder is this stranger a missing person now? Does he have a family or loved one looking for him? Has he lost his job or are they looking for him too? While those questions can be brushed off by many as not important, the fact that the film spends the majority of its runtime having Diana go through this scenario with tinted-glasses and stubbornness because she’s got Steve Trevor back, even at the cost of this poor strangers soul and while it could’ve worked generally in theory, in execution it leaves a lot to be desired.

With the Dreamstone, everyone’s wishes become literal with a trick behind them. The issue with the Steve Trevor wish is, with Max Lord helping people with wishes that create walls surround cities and the like, why did they have Steve Trevor possess a human vessel rather than being simply resurrected? At first I believed this was part of Diana’s consequence for the wish, the love of her life can be brought back to life but he must possess this stranger, but nope the film points out that Diana losing her powers is due to Steve’s return, which still begs the question of why the human vessel element? Another question is in regards to the end of the film when Diana happens to have a chance encounter with the stranger and has brief interaction with him, the film makes out in the final act in a pivotal moment when a potential nuclear holocaust is averted, leading to one army personnel saying that, “The missiles are disappearing from our screens”, meaning that some people remember whats occurring when certain wishes are renounced, yet the stranger doesn’t remember anything when he comes across Diana, leading to the question where did he go?

I do wonder though would the entire sub-plot work better if they withheld the body possession angle till later in the film. Granted, it will be argued that that angle shouldn’t have been done at all, but in playing devils advocate, what if they withheld that information until the White House sequence when they try to capture Max Lord when they find out that he has become the human embodiment of the Dreamstone, then it’s revealed through Max Lord that Steve Trevor is actually using a vessel to be there, leading to his and Diana’s parting goodbye before she renounces her wish. Would the scene still be effective and that idea of the sub-plot being withheld and used as a ‘twist’ feel less problematic than the current one does in the eyes of the audience?

It is a shame though that with that angle, as problematic as it is, I thought the dynamic between Diana and Steve Trevor provided some of the strongest scenes in the original film and, hell, even with its issues there’s still moments of enjoyment to be had between them. But spare a thought for poor Kristoffer Polaha, aka the Stranger, or as he’s officially called through the crew list on IMDb…Handsome Man. Handsome Man deserved better. Like an actual name for starters.