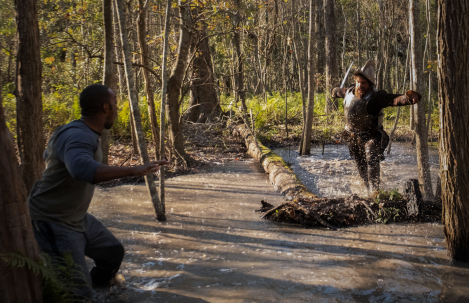 When New Orleans paramedics and longtime best friends Steve and Dennis are called to a series of bizarre, gruesome accidents, they chalk it up to the mysterious new party drug found at the scene But after Dennis’s oldest daughter suddenly disappears, Steve stumbles upon a terrifying truth about the supposed psychedelic that will challenge everything he knows about reality and the flows of time itself.

Synchronic is the latest feature film from directors Justin Benson and Aaron Moorhead. Set in New Orleans, we follow two paramedics, Steve Denube and Dennis Dannelly. Steve is single while Dennis is married with two children. On one late shift they encounter the deaths of people in strange states, and the next few calls during the days they get they all have one connection: evidence that they have taken a new designer drug known as Synchronic. When Steve receives a medical diagnosis that makes him ponder on what to do with his life, Dennis’s daughter Brianna goes missing after taking Synchronic. This leads Steve to buying up the remaining Synchronic’s left in town to chronicle how the pill works in the hopes of discovering what happened to Brianna and if it can hopefully help them find her.

Justin Benson and Aaron Moorhead are no strangers to exploring science fiction in the films, from 2012’s Resolution to 2017’s The Endless, but here it could be argued that Synchronic is their most ‘mainstream’ effort due to having two recognisable actors, Anthony Mackie and Jamie Dornan, taking up the majority of the screen time. The first act focuses on the personalities of Steve Denube and Dennis Dannelly. Steve is single, somewhat of a ladies man, and heavy drinker who uses pills in the ambulance to help recover from them hangovers and we soon learn is suffering from an incurable tumour. Dennis meanwhile is married with two kids, but seems to be growing through a mid-life crisis of questioning whether he settled too early and let life pass him by, listening to Steve’s exploits and wondering what could’ve been. We also see them called to various locations and finding people with unexplainable injuries, e.g. a specific kind of snake bit, to some bodies they discover that have died (body dismemberment in a lift/elevator shaft). On site they discover a wrapper with a name on it, Synchronic, which they find out is a new designer drug. When one call takes them to a house where someone has taken the designer drug, has simply disappeared and discover that it’s Dennis’s daughter Brianna, that’s when the film begins to pick up in the middle act. The first act sets up the eerie tone of the film, from when we see in the opening of what happens to those that take Synchronic, to Steve and Dennis going about their work as paramedics, with certain elements of it feeling uneasy in how Benson and Moorhead shoot the scenes, from rewinded sequences (ambulance driving at night in reverse) to the tilt shots when they are about to check the next horrific call they get. There’s also some really nice jump cuts in the editing here from Benson, Moorhead and Michael Felker, especially when it focuses on Steve and it cuts to him in a different location but still in the same position, such as the hospital to the ambulance.

If anyone that are fans of Benson and Moorhead’s work were afraid of them losing their distinct style and flair by attracting high profile names to their latest feature, believing they’d go for a more conventional film here, you’ll be glad to know that isn’t the case here, as the budget and ideas still feel aligned with their previous work (particularly Spring and The Endless). The concept and execution of the Synchronic drug, causing the person who takes it to travel back in time, is well handled here, especially in showcasing why Steve ends up in a different time period each time he takes it. His trips can be horrifying and his reactions to his journeys that he records can also be amusing, and in terms of visual effects, I like how the transitions of time travelling when taking the drug were portrayed here. Anthony Mackie gives a commanding performance as Steve Denube, it definitely feels like Mackie really wants to dig deeper into doing these kind of genre films/tv series as of late (Outside The Wire, Altered Carbon) and here Steve is a tragic, intelligent figure that we follow on his journey that potentially has severe risks as each trip is into the unknown and could result in his death, but as the film progresses, we learn of his past trauma that led him to being as closed-off as he is to everyone, even Dennis. I would’ve liked the friendship between Steve and Dennis to be developed a bit more so the emotion and stakes in the final act could be more effective for me. The first act focuses on them and their daily paramedic work, but once Denis’s daughter goes missing, he takes a backseat compared to Steve and suddenly some of the things he goes through during the course of the film may feel like it comes from left-field.

Justin Benson and Aaron Moorhead continue to impress with their work, particularly when it comes to how they execute time-bending concepts, and Synchronic is no different with a really strong lead performance from Anthony Mackie.