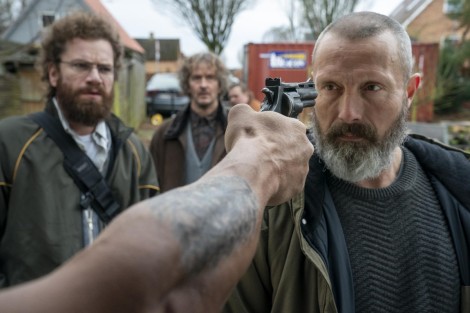 Markus, who has to go home to his teenage daughter, Mathilde, when his wife dies in a tragic train accident. It seems like an accident until a mathematics geek, who was also a fellow passenger on the train, and his two colleagues show up.

Riders of Justice starts with a series of sad events: a stolen bike, dismissal, a train accident. Coincidence or a causal link? Data analyst Otto examines the matter aided by his eccentric colleague Lennart and their even stranger friend Emmenthaler. Together with professional soldier Markus, who lost his wife in the train wreck, the men develop into angels of wrath.

Riders of Justice is a Danish black comedy-drama written and directed by Anders Thomas Jensen. The film focuses on Danish soldier Markus, who returns home after serving overseas when he learns that his wife died in a tragic train accident. When he and his daughter Mathilde, who was on the train but survived, are left to deal with their grief in their own way, data analysis Otto Hoffmann and Lennart Gerner Nielsen arrive on his doorstep and tell him that they believe the accident was really a premeditated effort by a biker gang known as the Riders of Justice to remove a key witness from an upcoming trial. Convinced by their theory, Markus teams up with Otto, Lennart and their friend Emmenthaler, to find any information that they can on the group and follow the dark path of justice.

From the brief premise in the lead up to watching this film, I was expecting a typical revenge story, but instead came away surprised by the subject matter and themes that the film contains, as it serves more talking about coincidences, trauma, and the meaning of life. The film begins with an impactful opening of the train accident which results in the death of a dozen people, including Markus’s wife, but everything is about the coincidences that lead-up to it. Mathilde’s bike is stolen so her mother decides to go into town with her. Meanwhile Otto and Lennart are sacked after a presentation of their statistical findings doesn’t go according to plan, leading to Otto getting the train home early, where has a chance encounter with Mathilde and her mother and offering his seat to them before tragedy strikes. Surely it was all a coincidence right? Well with Otto’s belief is that the numbers don’t lie and that everything can be tied to a numerical equation and while the police politely dismiss his opinion that the accident was a deliberate sabotage when he learns a passenger that he manage to catch a glimpse of before the crash was a key witness in an upcoming trial against a biker gang, he starts to look for evidence and with the help of Lennart and other friend Emmenthaler, a facial recognition expert. The trio have a very unique, argumentative friendship and for the most part, they do a lot of the heavy lifting in terms of deliver exposition, monologues about the meaning of life and we also learn that they still carry their own personal trauma that gets fleshed out over the course of the film.

Nikolaj Lie Kaas gives a solid performance as Otto Hoffman, a figure trying to overcome the accident by pursuing the idea that there’s too many coincidental factors in play that the train accident has to be premeditated, and it is in the quieter moments of the second half of the film we flesh out his character further and he has a particular memorable scene with Andrea Heick Gadeberg. Lars Brygmann gets to shine with his performance as Lennart, as he charismatically bluffs his way through therapy sessions with Markus’s daughter in order to maintain their cover of seeking retribution agains the riders of justice, and his bickering with Nicolas Bro’s Emmenthaler is humorous to watch, and Bro also gives a good performance with the material he has. As for Mads Mikkelsen as Markus, this is a more restrained performance from Mads as a figure whose emotionally unavailable but is boiling with rage underneath his cold demeanour, and even becomes very cold in how he talks to his daughter about the death of her mother, his wife, especially when it comes to the belief of whether God is real or not, what becomes of us after death…Markus isn’t actually the ideal person to have discuss these things with you at a time of grieving. When Markus finally finds a face in which he can unleash his anger on is when we seem to get to really see who Markus is and Mads brings a certain pathos with his performance that isn’t such an easy thing to do with a character like this. Andrea Heick Gadeberg also gives a great performance as Mathilde, effortlessly holding her own sharing the screen with Mads Mikkelsen, Nikolaj Lie Kaas and Lars Brygmann.

While I enjoyed Anders Thomas Jensen’s writing here amongst the characters, and some of the twists and turns the film takes over the course of the one hour and fifty-six minute runtime, the film did feel like it was starting to lag in the middle act when we had this dysfunctional family/band of misfits going on in Markus and Mathilde’s house and that’s where some of the attempts of humour in there didn’t work for me as it seemed too unbelievable that Mathilde and her friend Sirius wouldn’t call the group out on their bluff of pretending to be therapists. There’s a fair amount of action on screen too, but if anyone is coming in expecting an explosive sequence, it’s very well executed but minimal in presentation. Roland Møller’s Kurt ‘Tandem’ Olesen is the villain that the group are hunting here, but he is barely given any screentime to make a memorable impression and just serves as a purpose of closure that the group need.

While it doesn’t quite deliver the balance of its comedic and dramatic moments, Riders of Justice still makes an impression with its look at coincidences and life itself, with memorable performances from Mads Mikkelsen, Nikolaj Lie Kaas, Lars Brygmann and Andrea Heick Gadeberg.