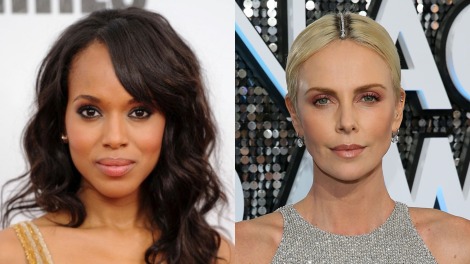 Netflix have announced that Kerry Washington and Charlize Theron are the latest names to join the cast of the film adaptation of Soman Chainani’s young-adult novel The School For Good And Evil, which Paul Feig is directing.

Best friends Sophie and Agatha are about to discover where fairy-tale legacies go to school: the School for Good and Evil, where ordinary boys and girls are trained to be fairy tale heroes and villains. With her princess ambitions, Sophie knows she’ll be picked for the School for Good and join the ranks of past students like Cinderella and Snow White. Meanwhile, Agatha, with her grim aesthetic and wicked cat, seems a natural fit for the villains in the School for Evil. Yet soon the girls find their fortunes reversed: Sophie is dropped into the School for Evil, Agatha into the School for Good. But what if the mistake is the first clue to discovering who Sophie and Agatha really are? Their friendship will be put to the test in this thrilling and comedic story where the only way out of a fairy tale is to live through one.

I am so thrilled to have Charlize and Kerry in this film. I was honoured to work with Charlize back on Arrested Development and have been dying to work with her again ever since. And I’ve been such a massive fan of Kerry’s forever and to finally find something for us to do together is just more proof that 2021 is gonna be way way better than 2020.

Chainani’s first novel of The School For Good And Evil became a New York Times bestseller, with the series selling over 2.5m copies, translated into thirty languages across six continents, amassing a global fan base. The sixth and final book, The School Of Good And Evil: One True King, was released by HarperCollins in June last year. David Magee and Laura Solon are writing the script.

One response to “The School For Good And Evil: Kerry Washington And Charlize Theron Join Cast For Film Adaptation Of Soman Chainani’s Novel At Netflix”