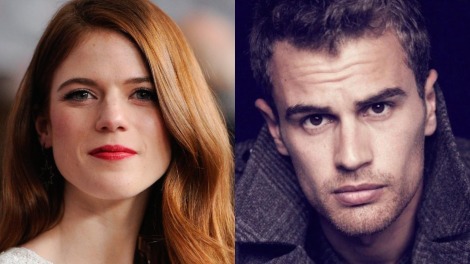 Deadline is reporting that Rose Leslie and Theo James have been cast as the leads for HBO’s series adaptation of Audrey Niffenegger’s novel The Time Traveler’s Wife.

The Time Traveler’s Wife tells the intricate love story of Clare and Henry and a marriage with a problem…time travel.

Rose Leslie (whose credits include Game of Thrones and The Good Fight) will be playing the role of Clare Abshire, a fiery, clever and unstoppable woman who for most of her life has had an amazing secret. Since she was six-years-old, Clare has had an imaginary friend: a kind and funny man, sometimes old, sometimes young, who appears in the woods behind her house and tells her tales of the future. Visits from the mysterious Henry are the bright spots in the tedium of her childhood. As the years pass and she grows into a beautiful young woman, she starts to realise her friend is not imaginary – he’s a time traveler, visiting from the future. And he’s not just from any old future, he’s from her future. Clare has a literal date with destiny. One day she’s going to meet a young man called Henry DeTamble, whom she’ll know very well but who won’t recognise her at all, and she will become the time traveler’s wife.

Theo James (whose credits include Archive and Castlevania) will be playing the role of Henry DeTamble, who also has a problem. Since he was eight-years-old, he’s been a time traveler. It’s not a superpower, it’s a condition; he can’t help it. Sometimes, when Henry is stressed or worried, and sometimes for no reason at all, he loses his grip on the current moment and falls naked into the past or the future. One minute he’s making breakfast, the next he’s naked at a hoedown in 1973. He can be stuck there for minutes or months, he never knows. His life is a rollercoaster of constant danger and white-knuckle survival. Until one day he meets a beautiful redhead in the library where he works. Her name is Clare Abshire, and although he’s never seen her before, she claims to have known him for all her life. Finally his curse has given him something good, and Clare and Henry are about to have the time of their lives.

Steven Moffat, who is adapting the project, released a statement saying:

I read Audrey Niffenegger’s The Time Traveler’s Wife many years ago, and I fell in love with it. In fact, I wrote a Doctor Who episode called ‘The Girl In The Fireplace’ as a direct response to it. When, in her next novel, Audrey had a character watching that very episode, I realised she was probably on to me. All these years later, the chance to adapt the novel itself, is a dream come true. The brave new world of long form television is now ready for this kind of depth and complexity. It’s a story of a happy ever after – but not necessarily in that order.

The novel has been adapted previously for the big screen in 2009, which was directed by Robert Schwentke and starred Rachel McAdams and Eric Bana. The film earned over $101m worldwide on its $39m budget.

Steven Moffat, Sue Vertue and Brian Minchin will executive producer through their banner Hartswood Films. The company is providing the project with Warner Bros. Television, as they have the rights to the title. The series is currently in pre-production.

One response to “The Time Traveler’s Wife: Rose Leslie And Theo James To Star In Series Adaptation Of Audrey Niffenegger’s Novel At HBO”