A retired special forces officer is trapped in a never ending time loop on the day of his death. 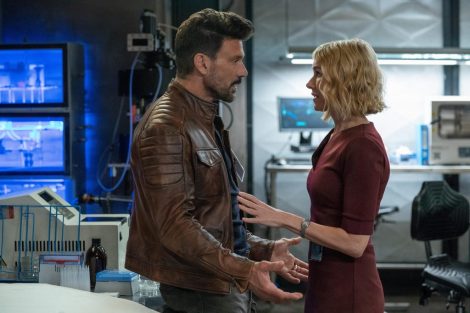 Stuck in a time loop, doomed to repeat the same day over and over again while being hunted by dozens of deadly assassins, a man struggles to find a way out of his strange predicament. 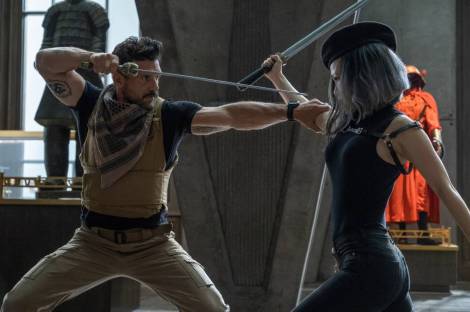 Boss Level is a sci-fi action film written by Chris Borey, Eddie Borey, and Joe Carnahan who also directs. The film focuses on Roy Pulver, a retired special forces officer who finds himself caught in a time loop, with everyone out to kill him from the moment he wakes up and not knowing why, though he has a fair idea that it may involve his ex Jemma and the mysterious project that she’s working on with her boss referred as the Colonel. Roy must remember precisely how each bullet, rocket, sword, car and helicopter comes his way in order to survive long enough to uncover the truth and find a way to make it through to the next day.

Boss Level is one of those films that’s been through the ringer, from its original conception under the original title (Continue) in 2010, to Carnahan retooling the script in 2012 to direct under 20th Century Fox. It’s however when he wanted Grillo to star as the lead in the film lead to the project being shelved as Fox didn’t agree with Grillo leading, so the project was shelved. Fast-forward to 2018 and production on the project, under new title Boss Level, took place and finally, finally in 2021 we get to see the project come to life. We’re immediately dropped into the action because as soon as Roy Pulver wakes up, he’s attacked in his apartment by a man with a machete, then as Roy can catch his breath from that a helicopter flies right up to his apartment and a man with a Gatling gun fires, destroying everything (and sometimes Roy) in sight. There’s a lot of narration in the first half of the film, with Roy explaining to us the number of predicaments he’s been in, how various deaths have played out, and that he’s still trying to figure why he’s repeating the day over and over again and why are people out to kill him. You can literally see on screen that Frank Grillo is having a blast playing the role of Roy, and as we come to expect from him in these roles that features fight and action sequences, he brings an everyman quality to the part and for at least 85% of the film, he’s in every shot or doing narration. There’s also a sub-plot in which Roy tries to connect with his estranged son, Joe, who doesn’t know that he’s his father and these scenes provide some respite from the action and gives the film heart and for me it worked well, having both Grillo’s (Frank’s son Rio has his debut role here as Joe) give good dramatic performances.

For the most part the action/chase sequences are well choreographed and edited together, with Roy’s numerous deaths being creative and sometimes to the point of being humorous with how absurd and violent some of them are. I also liked a little inside joke Grillo give about Liam Neeson in the film, considering he, Carnahan and Neeson worked together on The Grey, stating to his son how he’s a real tough guy while Liam is a pretend one. From the supporting ensemble, Selina Lo is definitely the highlight of the assassins that is out to kill Roy, Mel Gibson gives the standard performance of being a shit-stirring villain as Colonel Clive Ventor, while Naomi Watts provides the emotional anchor to the meat of the story as Roy’s ex Jemma Wells. Outside of Selina Lo and Rio Grillo however, I wouldn’t say the rest of the ensemble get to standout as they all have limited screen time, even Naomi Watts and Mel Gibson, so if you happen to be coming in expecting a lot of Watts and Gibson screen time, then you might feel disappointed here. The film also takes a particular turn towards the final act that tries to stop the film going stale and give some juice and stakes for the finale that didn’t really work for me, there was just a smudge of too much narration used in the film, and there’s some visual effects that were good and some that were slightly underdeveloped.

Boss Level comes exactly as advertised, with some well choreographed action sequences and Frank Grillo has an absolute ball in the role.

BOSS LEVEL WILL BE AVAILABLE IN THE U.S ON HULU ON 5TH MARCH 2021. NO OFFICIAL UK/IRELAND RELEASE DATE AS OF YET.