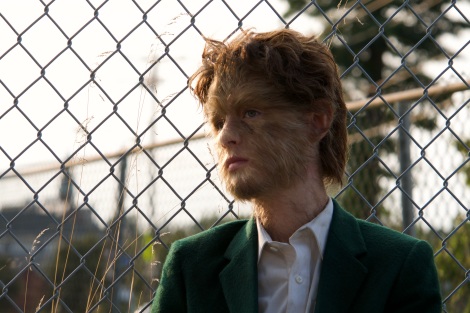 Follows a young boy who runs away from home in the search of his estranged mother.

A teenage boy, who has a skin condition that causes his skin to grow an abnormal amount of hair, runs away from home in the search for his estranged mother and on his journey he befriends aspiring singer and transgender girl Aristiana.

The Adventures of Wolfboy is written by Olivia Dufault and marks the directorial feature debut of Martin Krejcí. Having started its main casting in 2017, having screened at a few festivals in 2019, and eventually came out at the end of October in the US through Vertical Entertainment, and now, finally, it is now available on digital platforms since the start of the week thanks to Signature Entertainment. The film focuses on a teenage boy named Paul, who lives an isolated life with his father in upstate New York, as he lives with a rare condition known as congenital hypertrichosis – an affliction that causes an abnormal amount of hair growth all over his face and body. On his thirteenth birthday, his father takes him to the carnival to try and get Paul to toughen up and be brave enough to show his face amongst the public and come out from isolation, though that leads to the bullies rallying around him. When they arrive home and Paul receives a mysterious gift for his birthday, he decides to run away on a quest to find his mother as well as some answers as to who he is.

The opening act gives the audience the basis of a teenager struggling with who he is, feeling alienated as he is treated different from everyone else and feels like nobody is able to understand him…it just so happens that this particular teenager, Paul, suffers from congenital hypertrichosis. While he at least know his father Denny doesn’t have it, Paul is irked of not knowing why he is this way, and his mother isn’t in the picture to help explain why he is the way he is. While his father tries to provide some tough love and have Paul hold his head high in a public space (a carnival) and remove his red ski mask that he wears out to stop people staring as much as they would without. Denny has the best of intentions, though his efforts make things worse as a group of bullies confront Paul when they notice him at the carnival, with some things like they look for him to bark like a dog and, of course, his father must’ve taken part in bestiality to have gained such a son. Feeling like he doesn’t know what else to do, Denny intends to send Paul to a private school known as Griffin Academy, but Paul is having none of it and when that mysterious gift arrives, which potentially leads to the location of his mother being in Pennsylvania, and he instinctively has to leave to learn the truth about himself and why his mother left him.

The Adventures of Wolfboy has a fantastical adventure element to it in, such as the chapter title cards and the artistry conveys fantasy, even though it is portrayed on the screen by screenwriter Olivia Dufault and director Martin Krejcí in a way that makes it grounded in reality, with the other teenagers of the cast going through their own transformations from Aristiana, who is a ‘mermaid’ dressed like aspiring transgender girl who is owning her identity, though a brief encounter with her mother tells you that she is not accepting of Aristiana’s gender identity, as well as an eye-patched criminal named Rose whose reason for having an eye-patch causes much curiosity from Paul that he has to know why she wears it. The performances amongst the ensemble are really good, particularly Jaeden Martell capturing the shy awkwardness of Paul really well, Sophie Giannamore is absolutely charming as Aristiana, Eve Hewson has a blast onscreen as Rose, and Chris Messina is earnest as Paul’s father Denny. Considering the role that he’s playing, John Turturro gets to be devilishly flamboyant as Mr. Silk, though I’m not particularly sure that the character’s journey of being the main antagonist worked for me, even though I understood his purpose.

The Adventures of Wolfboy is an interesting take on during a teenage coming-of-age story with a fantastical meets realism tone, with solid performances from Martell, Giannamore and Hewson, with a sweet message to take from it at the end.