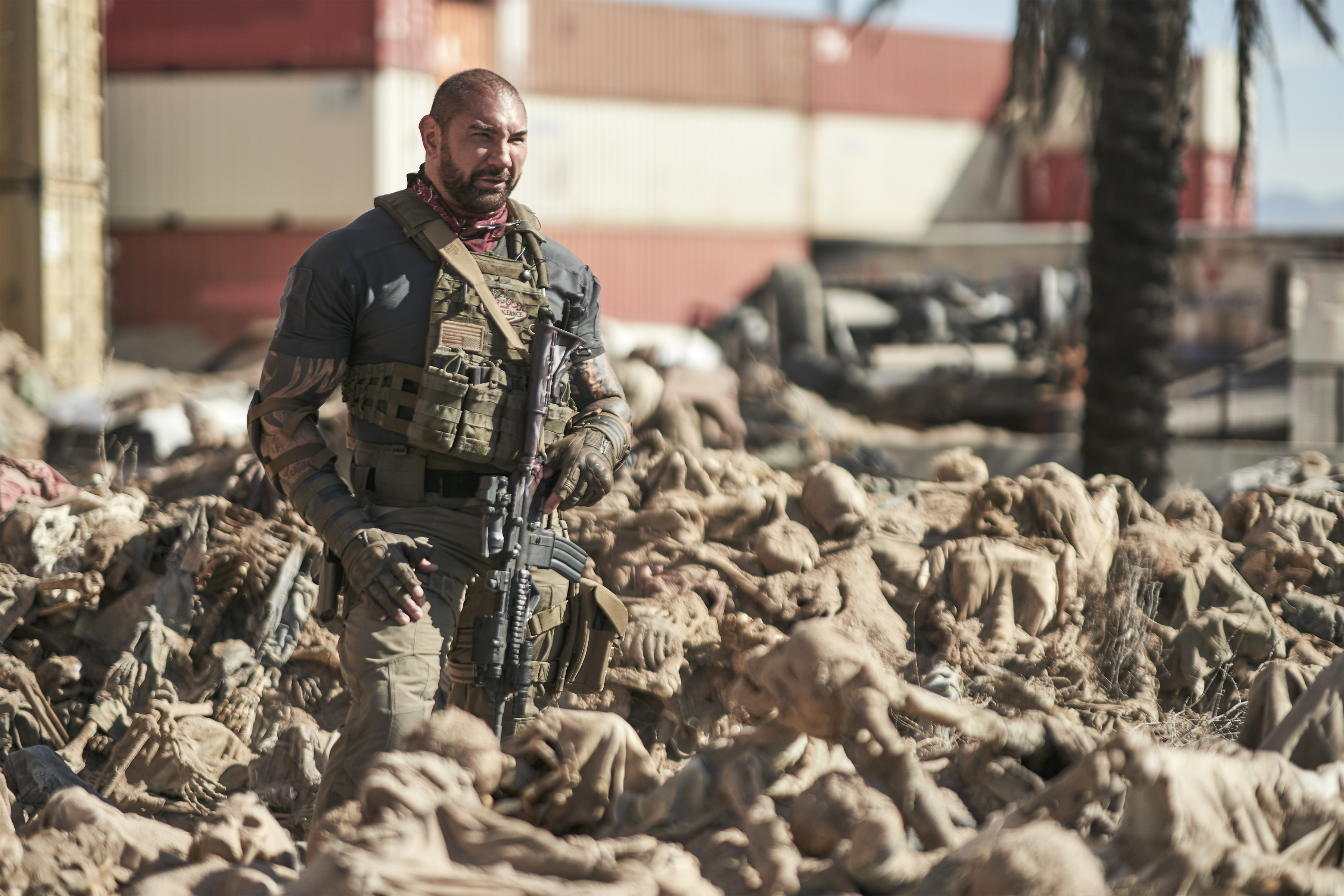 Following a zombie outbreak in Las Vegas, a group of mercenaries take the ultimate gamble, venturing into the quarantine zone to pull off the greatest heist ever attempted.

When Scott Ward, a former zombie war hero who’s now flipping burgers on the outskirts of the town he now calls home, is approached by casino boss Bly Tanaka, it’s with the ultimate proposition: break into the zombie-infested quarantine zone to retrieve $200 million sitting in a vault beneath the strip before the city is nuked by the government in 32 hours. With little left to lose, Ward takes on the challenge, assembling a ragtag team of experts for the heist. With a ticking clock, a notoriously impenetrable vault, and a smarter, faster horde of Alpha zombies closing in, only one thing’s for certain in the greatest heist ever attempted: survivors take all.

Army of the Dead is Zack Snyder’s return to zombie territory, seventeen years after he helmed the Dawn of the Dead remake. Here he directs as well as co-written the screenplay alongside Shay Hatten and Joby Harold. Army of the Dead takes place after a zombie outbreak has left Las Vegas in ruins and is walled off from the rest of the world. When Scott Ward, a displaced Vegas local and former zombie war hero, is approached by casino boss Bly Tanaka, it’s with the ultimate proposition: break into the zombie-infested city to retrieve $200m sitting in a vault beneath the strip before the city is nuked by the government in thirty-two hours. Driven by the hope that the payoff could help pave the way to a reconciliation with his estranged daughter, Scott Ward takes on the challenge, assembling a ragtag team of experts for the heist. With a ticking clock, a notoriously impenetrable vault, the team also has to deal with a horde of Alpha zombies that have been thriving in the city left behind for them to rule.

The opening fifteen minutes definitely set the tone of what to expect from the film, as we see how the U.S military convoy transporting a payload is compromised and the outbreak spreads across Las Vegas, and we get a montage of the chaos to a cheerful rendition of ‘Viva Las Vegas’, and it’s definitely more creative and fun than having one character deliver a heavy amount of exposition. Through the montage as well we get a look at some of the characters we will be following the rest of the film and it gives the audiences a glimpse into what they’re capable of in the heat of battle. The designs of the zombies themselves are interesting enough, as Snyder merges George A. Romero’s slow-moving undead types with what we’ve come accustomed to this century with faster, more intelligent like zombies (referred to here as Alphas) and I thought the make-up, special effects departments done a good job with their look, particularly that of the zombie tiger that we got a glimpse of in the promotional material and, thankfully, the tiger’s not wasted at all. There is some very well executed sequences in the film here, from the opening title montage of the zombie war in Las Vegas, to characters having to fight their way through a horde that wake up from their dormant state in one of the casinos, it’s all very well choreographed and stylised and highlights what Snyder is good at capturing. The film also boasts a talented ensemble and for the most part, I liked the characters here. Dave Bautista gets to show his range, as well as be the lead of this big budget film and I really liked his performance as Scott Ward, a man scarred by past trauma during the zombie war and tries to make amends in some way to a daughter that doesn’t want anything to do with him. As usual, he carries the action scenes, but it’s in the quieter character moments that he really stands out. My favourite part of the film was this odd-couple pairing between Omari Hardwick’s Vanderohe, a zombie-killing veteran-turned-philosopher, and Matthias Schweighöfer’s Dieter, whose brought onto the mission as he’s the only one capable of cracking the vault, and their dynamic over the course of the film provide some of the funniest moments.

The way Tig Notaro is utilised here is one that I was most interested in, as she replaced Chris D’Elia and had to have her scenes shot alone and be inserted into the film either by green screen or other special effects and I thought they handled that really well in the film. Now I was watching on my television (still no cinemas opened here till next week) but for the most part it seemed pretty seamless, other than maybe a few seconds here and there during the heist setup scene involving Hiroyuki Sanada’s Bly Tanaka, but that was really searching for it. As a character, I thought she was decent too, as was Ana de la Reguera as Maria Cruz, Raúl Castillo as social media zombie-killing star Mikey Guzman, and Nora Arnezeder as Lily, also referred to as the coyote. Not only did Zack Snyder direct, but he also took on the cinematography for the first time on a feature film…and it shows in a negative way for me, particularly as there’s a lot of shots in which he puts the focus on one character and everything else, other characters and the backgrounds, are blurred out, which over time I found it to be very jarring and eventually became distracting when certain scenes played out. Like Snyder’s last few films, my man criticism is that the film does feel overlong (clocking in just shy of two and a half hours runtime) and I definitely felt liked it was dragging in the middle portion, just waiting for the team to go get to the vault already. Also in the final act, just when you think the film has reached its conclusion and the credits are about to roll, there’s almost another ten minutes to go and somewhat feels unnecessary. As for the characters, I liked the performances from the ensemble for the most part, just wish that we had more depth to them here and there, but with a reported animated and live-action prequel films on the horizon, I suppose we’ll get it from them. The only sub-plot I wasn’t really a fan of was the friction between Scott and his daughter Kate, primarily because it follows the cliché the child not liking her father, forcing their way into the mission and when we found out the reasoning for why they’ve been acting the way they have is an eye-roll moment, mainly because it’s a reason that we’re seeing used a lot now between films and television shows.

While there is certainly a lot of fun to be had with Zack Snyder’s Army of the Dead, it does feel excessive due to its runtime. The ensemble are really good here, particularly Dave Bautista and Matthias Schweighöfer.

ARMY OF THE DEAD WILL BECOME AVAILABLE ON NETFLIX ON THE 21ST MAY 2021.