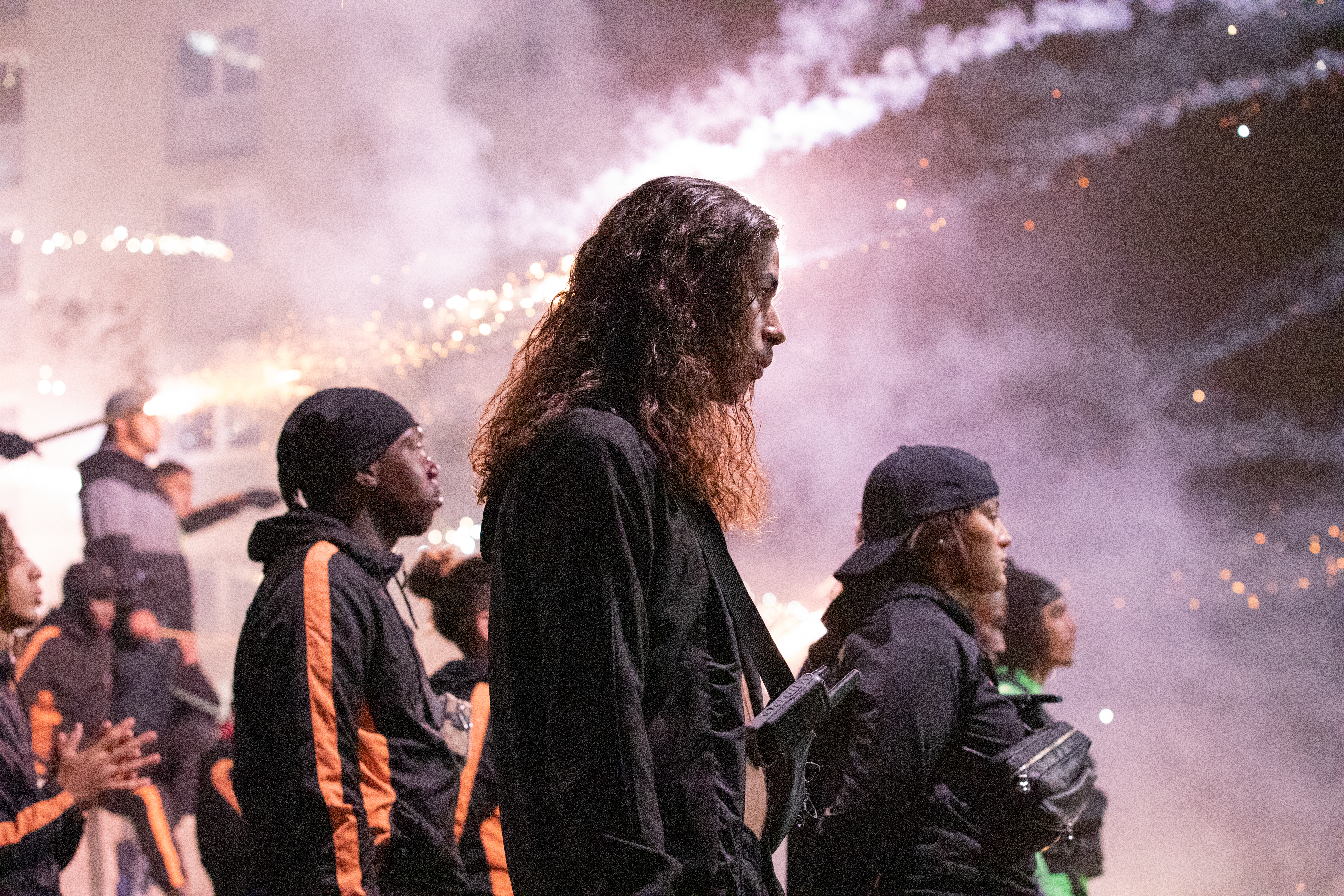 Hours after the tragic death of their youngest brother in unexplained circumstances, three siblings have their lives thrown into chaos.

Athena is a dramatic thriller directed by Romain Gavras, who also co-wrote the screenplay with Ladj Ly and Elias Belkeddar. Set in France, tensions rise in the country as a young boy is dead following an alleged altercation with the police. One of his brothers that is a French soldier, Abdel, calls for calm from the public to allow the police to investigate and find his brothers’ killers and bring them to justice, even looking to stage a silent march as a means of protest. While he calls for calm, his younger brother Karim launches an assault on the police station, stealing a safe of weapons, and retreating back to the neighbourhood to begin preparations for the inevitable retort. As Abdel is caught between Karim’s desire for revenge, and the criminal dealings of his older brother Moktar, the situation in the community of Athena is transformed into a fortress under siege, becoming a scene of tragedy for both the family and beyond.

Like some members of the audience that will have/will be watching Athena this weekend, I’m slightly familiar with the work of Romain Gavras, more so with his work on music videos (‘No Church In The Wild’ by Jay-Z/Kanye West in particular) than his feature films (Notre Jour Viendra and The World Is Yours). From the moment the film opens, Gavras immediately showcases his directorial talents as we’re treated to a one shot take that is visually and technically impressive, and the moment that Surkin’s musical score kicks in leading into the title card, the film now has a grip on you and for the next hour and twenty minutes, it’ll show no signs of letting you go. While the opening is outstanding, there are plenty of other long takes, as we follow the three brothers – Abdel, Karim and Moktar – during various points of the siege, as well as the inclusion of one police officer Jérôme, who is part of a squad that is sent in to Athena to tackle Karim and the army of youths. I found Gavras’ direction to be outstanding here, with notable scenes that stood out being the films opening, as well as one shot at night involving the riot squad entering Athena and a fireworks budget that I would really like to know the cost of.

As impressive as the film looks, I was gripped by the story involving the three brothers, particularly in the quieter moments they have to themselves in order to reflect on youngest brother Idir’s death, but also overcome with what they’re trying to achieve over the course of the siege. Dali Benssalah gives a great performance as Abdel, the soldier that has returned from serving in Mali, attempting to be a pillar for the community in calling for calm and over the course of the film, still calls for calm and attempts to get Karim to stop his revolt in his thirst for justice. Abdel’s journey is an interesting one to watch and Benssalah was great. In his big screen debut, I thought Sami Slimane was great as Karim, his presence on screen is immediately impactful once he torches the door of the police station with a Molotov cocktail, to how he orchestrates an army to essentially attempt to strip down the system whilst looking for revenge and justice. Ouassini Embarek also gives a good performance as the third brother of Idir, Moktar, who runs a drug operation within Athena. Unfortunately however, Embarek doesn’t get as much screentime as Benssalah and Slimane, and is given the more tricky roles of the trio to play as the character cares more about his own survival and exploiting the system that is currently set for them for his own personal and financial gain.

The film is great on the technical, visual, and acting standpoints, but in terms of closure, it’ll be interesting to see what the audiences views will be. While some films like to leave certain things open to interpretation, Athena provides closure with a final shot that I’m sure will spark some discussions amongst film fans on whether they liked it or not. One sub-plot I’m not sured I bought in to was one involving Alexis Manenti’s Sébastian, it just felt like it came out of let-field for me.

From the moment Athena begins, it doesn’t let you loose from its grip with arguably one of the best openings to a film this year, to the greek tragedy that unfolds before are very eyes. Romain Gavras’ direction here is terrific, as is the cinematography work by Matias Boucard.