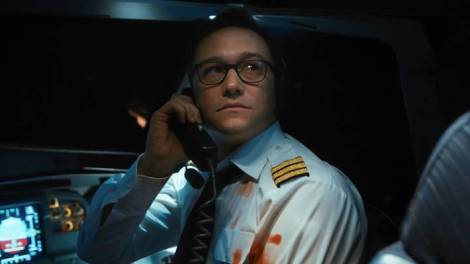 A pilot’s aircraft is hijacked by terrorists.

7500 focuses on American co-pilot Tobias Ellis, who is in the cockpit awaiting the arrival of pilot Captain Michael Lutzmann. The both of them prepare for the plane to take-off, making flight checks before taking off on their flight from Berlin to Paris. During the flight however, when a flight attendant attempts to enter the cockpit, a group of young men try to storm the cockpit, with a fight breaking out between the pilots and the hijackers. While Lutzmann is fatally stabbed, a wounded Tobias manages to stop the assault for now and secures himself inside the cockpit, leading to a battleground on board the plane as Tobias attempts to figure out a way that he and the innocent passengers and crew can make it out of this alive.

7500 marks the directorial feature debut of Patrick Vollrath, who co-wrote the screenplay with Seanad Halilbasic, and sees the return of Joseph Gordon-Levitt to our screens in the lead role. Joseph Gordon-Levitt plays the role of Tobias Ellis, an American co-pilot onboard a flight travelling from Berlin to Paris, with his girlfriend and mother of his child also onboard as one of the flight attendants. Whilst they take off and begin their journey of heading to Paris, a group of extremists attempt to hijack the cockpit with shards of broken bottles and glass as shanks for weapons. Tobias foils the first attempt however, locking him, Captain Michael Lutzmann, and an unconscious extremist, in the cockpit.

During the course of the films one hour and thirty-two minute runtime, bar the opening few minutes of showing the extremists arriving and go through security at the airport, it primarily takes place within the confines of the cockpit and the film is effective in using this limited place to its advantage by creating a sense of tension and dread for Tobias as the extremists try to knock their way through the door to take over the plane. For his first directorial feature, Vollrath showcases his talents of working with a single camera in a tight space, following Tobias trying to patch up himself and the pilot, as well as tying up the extremist and keeping an eye on the tv monitor to see what’s happening outside the cockpit. What makes the tension more effective in the film is the use of sound, as there’s no musical score or soundtrack, making sure that you feel like you’re in the cockpit with Tobias and you’re just as claustrophobic and frightened as he is. It’s been a while since we’ve seen Joseph Gordon-Levitt leading a film (2016’s Snowden biopic to be exact) and here he reminds everyone just how good he is with his performance here as Tobias Ellis, playing the everyman that is trying to do the right thing for everyone in extraordinary circumstances, even though that sometimes results in tragic consequences. JGL is not the only one who impresses in the film as I thought Omid Memar gave a very good performance Vedat, one of the terrorists who feels unsure about what they’re doing and who mentally becomes unstable and unpredictable as the film escalates to its conclusion, making you feared and fearful for him.

While the film handles the tension well and has you immersed in Tobias’ plight, the final act slows everything down, while the tension is still there it does feel like it has lost that edge it had earlier in the last fifteen minutes. What will come as disappointing to some viewers is that the antagonists are muslim here, that feels like a trope that should’ve been left in the mid-2000’s in regards to how one note and lazy they are portrayed here.

The film is a decent tense thriller with good performances from Joseph Gordon-Levitt and Omid Memar, it’s just the final act and the trope of using Muslims as the hijackers that take the viewing experience down a notch for me.