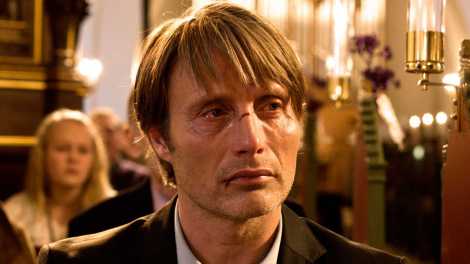 A teacher lives a lonely life, all the while struggling over his son’s custody. His life slowly gets better as he finds love and receives good news from his son, but his new luck is about to be brutally shattered by an innocent little lie.

The Hunt (aka Jagten) has us follow Lucas, a man who works as a teacher within a close knitted community at the local kindergarten/nursery. As he struggles to maintain a relationship with his son after being divorced, a student at the school tells a lie about him to another teacher which leads to Lucas being the outcast of the town and shamed by the community as he tries to prove his innocence.

The Hunt is a Danish drama directed by Thomas Vinterberg, who co-wrote the screenplay with Tobias Lindholm. Within its close-knitted community setting, we follow the journey of Lucas, a preschool teacher who moves back to the place where he grew up following his recent divorce. As he struggles to maintain a relationship with his son Marcus, Lucas does begin a new relationship with coworker Nadja. However, one of the students at the kindergarten, Klara (who also happens to be the daughter of his best friend Theo), makes a comment about him to the kindergarten director, Lucas’s life is forever changed. The drama focuses on how a lie can be fabricated and lead to a web of false accusations, how a seemingly civil community turn into an irrational mob who often approach Lucas violently once the accusation becomes public knowledge and ultimately how it can not only affect the accused but those close to him. What makes the story so effective is how real it feels amongst how members of the community would react, almost with an unflinching stance of being guilty without evidence because, after all, how can a child make such an accusation and it turn out not to be true? Vinterberg shows early on how Klara’s is shown an explicit image by her older brother and his friend that festers in her mind and when, in a brief moment in which her affections for Lucas are rejected, out of hurt feelings, spite and imagination, a conversation she has with the kindergarten director leads to a spiral of events that alters Lucas’s life and we see how Klara struggles to understand what is happening as she almost immediately forgets about that night or the next morning. When the accusation begins to escalate, she even attempts to say that Lucas done nothing wrong but the words are immediately shut down to being a case of the child going through terrible trauma, unwilling to comprehend that the accusation from Klara is not true. If the film had’ve handled the material as a did he/didn’t he, this absolutely would not have worked for the audience and would’ve made for uncomfortable viewing, but Vinterberg wants to show the audience of Lucas’s innocent and root for him to be proved innocent and overcome the mistreatment he suffers from the community, particularly in a sequence in a supermarket in which he is assaulted by the staff and defiantly stands up for himself by taking violent retribution himself. The direction by Vinterberg is really good, as well as how cinematographer Charlotte Bruus Christensen captures natural light in certain scenes. The ensemble is also terrific, particularly Mads Mikkelsen giving an understated performance as Lucas, mostly conveying emotion through his face whilst containing his anger to the point it boils over at the church service on Christmas Eve. Thomas Bo Larsen also gives a great, compelling performance as Theo, who in time becomes conflicted overtime when he witnesses how his former-best friend is being shunned by their circle of friends as well as the community as a whole, yet can’t believe that his daughter can make such an accusation and not be true. Annika Wedderkopp also gives a really good performance as Klara, whose behaviour at times is perplexing yet she should never be viewed as a villain by the audience. The Hunt is an engaging, emotionally draining and effectively told drama.

FAVOURITE SCENE: Lucas is assaulted at the supermarket by the staff and is thrown out. All the frustration and anger Lucas has kept inside is unleashed with one single headbutt as he walks back in and takes on the biggest staff member in there.

DID YOU KNOW: Premiered at the 2012 Cannes Film Festival, as the first Danish-language film in the main competition since 1998.