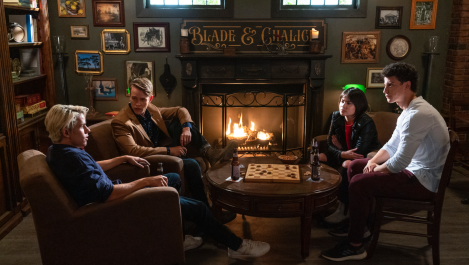 Media outlets are reporting that Netflix have cancelled fantasy-horror series The Order after two seasons.

The series focuses on High School graduate Jack Morton, who obtains a scholarship to Belgrave University, though he and his grandfather Peter have an ulterior motive for attending there. Once there, Jack learns that there happens to be a secret society based on the college grounds, The Hermetic Order of the Blue Rose, beginning to uncover a secret world of magic and learns of an underground battle between The Hermetic Order of the Blue Rose and a secret society of werewolves known as the Knights Of Saint Christopher.

Writer and creator, Dennis Heaton, broke the news of the shows cancellation on twitter.

For two seasons I was honored to work with an incredible cast and crew on The Order for @netflix. It is one of the best experiences of my career. Unfortunately, we aren’t returning, but I will always cherish the memories and the props I stole. Thank you all for watching.

The news doesn’t come as much of a surprise, despite the shows cult following, as there was very little promotion in regards to the second season, with only one trailer a week or two before its release on the streaming service and, even then upon its weekend release, you had to search for it rather than it automatically popping up on the main hub. Even though the series wasn’t for me, I can see why people enjoyed it and it’s a shame they’re not get some kind of resolution considering the second season ended on a cliffhanger.