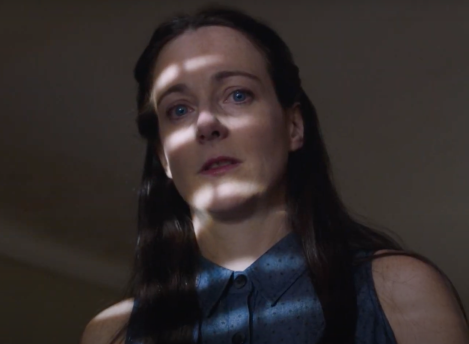 One night at her home, Cecilia has a knock at her door but she doesn’t answer. The next day, the person’s body is discovered murdered by the police, and the decision she made that night begins to haunt her.

Cecilia is a sociology teacher. One night the son of her maid desperately knocks on the door of her house. She doesn’t open. The next day, Kevin’s body shows up murdered by the police. Cecilia begins to be haunted by the young man’s ghost.

A Common Crime, also known as Un Crimen Común, is an Argentine drama directed by Francisco Márquez, who co-wrote the screenplay alongside Tomás Downey. The film focuses on Cecilia, a sociology teacher who is also busy looking after her young son Juan after being separated from his father. One night Kevin, the son of a woman who helps Cecilia clean the house and look after Juan, knocks on her front door, to which Cecilia declines to answer. The next day Cecilia learns that Kevin was murdered and she instantly becomes haunted by guilt.

The film has a rather interesting premise, looking at Cecilia’s decision to hide from Kevin’s view and left his knocks go unanswered, and becoming consumed with guilt over that night after discovering that Kevin has gone missing. Why did Kevin knock on Cecilia’s door? Why is he missing? Who would be chasing him? While the film raises these questions, primarily the film focuses on Cecilia struggling to cope psychologically about Kevin, the guilt she feels over not answering the door and then starts to become paranoid over every creek she hear’s in and around her house, with those scenes complimented well by the work of the sound design/mixing by Jesse Marmo and María Fernanda Sáenz. In terms of performances, the rests primarily on Elisa Carricajo’s shoulders and I thought she conveyed the emotional turmoil of Cecilia well and thought she gave a really good performance with the material she was working with.

While Francisco Márquez obviously has confidence in his approach to directing the film, as well as the script co-written alongside Tomás Downey, unfortunately it feels like going for the deliberate minimal approach with the narrative didn’t work for me. No sooner is Kevin missing than minutes later his body is recovered from the river and we learn that the local police were responsible for his murder. While it presents an angle of political drama about police corruption in Argentina, that angle is pretty much sidelined and left lingering as we focus on whether or not Cecilia is actually being haunted by the ghost of Kevin or is it all in her head. It even has someone to say about the privilege and class angle, Cecilia being in a nice quiet suburb and her maid/houseworker being in a rough neighbourhood, but even that is handled with minimal effort that even with the films relatively short runtime (one hour and thirty-six minutes), the film feels flat and a bit of a chore to sit through, which is a shame as it has an interesting premise.

While A Common Crime has an interesting premise and a nuanced lead performance by Elisa Carricajo, it unfortunately takes such a minimal approach with the narrative that it makes it more of a frustrating than compelling experience.